The Bachelor's Chris Soules on Dancing With the Stars: 'I Am a Straight-Up Amateur'

When Chris Soules, a.k.a. Prince Farming, left The Bachelor with his newly-minted fiancée Whitney Bischoff on his arm, the plan was to go back to Iowa and start their life together. Then the producers of Dancing with the Stars called.

“I didn’t have any goals or desires to be on the show,” admits Soules. “But we met a couple of weeks before ‘The Final Rose’ actually aired, and the producers started telling me about the show and what it was actually like. I had watched the show before, and it looked like an interesting deal. So after talking to them and my fiancée about it, and they made the offer, I signed up. It sounded like something fun.”

For Soules, it has proven fun, even if it’s much more difficult than he originally realized. “It’s exceeded my expectations,” says Soules. “It’s really rewarding, both physically and mentally. I’ve accomplished things I never thought I could accomplish.”

Before signing up for the show, Soules had never danced before aside from what he described as “busting a few random moves at fair dances and wedding dances.” “It is incredibly hard,” said Soules. “Going on stage to perform is a huge adrenaline rush. It’s pushing me completely out of my comfort zone.”

His first week on the show was particularly challenging, because—due to his commitments to The Bachelor—he had less time to prepare than other competitors. “When I first started, Witney [Carson] didn’t know if I was going to be able to get there! But after a few days of training, it started to click,” says Soules. “It’s really challenging. And those professionals make it look so easy. It’s just incredible the way they make their bodies move. When I watch them during the live show, I just don’t know how they do it.”

Soules says he counts himself lucky that his professional partner, Witney Carson, and his fiancée, Whitney Bischoff, have first names that are homonyms. “It’s good because I never get the two confused. I never make a mistake, because it’s always Whitney,” says Soules, who denotes “Dancing Witney” and “Fiancée Whitney” when speaking with friends. As for working with Carson, Soules doesn’t mind her tough-love method of teaching. “She’s a firecracker and keeps me in line, that’s for sure,” he says. “She’s 21, but she doesn’t act like a 21 year old. She’s focused on us making it to the very end. So I don’t mind her being stern with me, because I am a straight-up amateur and she’s got her work cut out for her.”

While Soules is enjoying the dancing, he knows that farming is his calling. “Once I’m done with Dancing with the Stars, I am headed straight back to Iowa,” he says. Not that he’s ready to hang up his jazz shoes just yet—in fact, he’s looking forward to pushing himself further and further as a dancer. “Hopefully I’m here for a while, and have a nice long run on Dancing before heading back to Iowa and doing what I do.”

This week, Soules will take part in the annual Dancing with the Stars tear fest, where each dancer does an interpretive dance to their most memorable year and everybody cries. Soules has chosen to mark the year 2014—the year he met his fiancée on The Bachelor—by dancing a rumba to “The Book of Love” by Gavin James. “Finding the love of my life and getting engaged and living with her for a short time in LA and being on Dancing with the Stars—all those things rolled into one have been the most absolute memorable year,” said Soules, who says he’s been rehearsing particularly hard this week. “This is a really special one for me, and I really want to be able to perform it.” As ever, expect to see Bischoff in the audience, cheering him on. 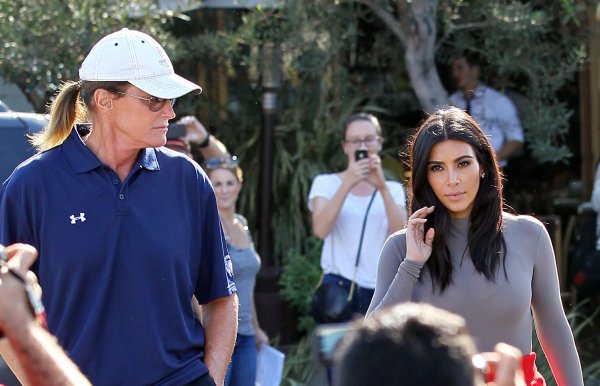 Bruce Jenner's Interview With Diane Sawyer May End One Conversation and Spark Another
Next Up: Editor's Pick