Plainclothes policemen stand in front of a crowd which came to see bodies of suspected Garissa University College attackers in a school compound in Garissa, Kenya on April 4, 2015.
Goran Tomasevic—Reuters
By Abigail Higgins / Garissa, Kenya

When al-Shabab militants stormed University College of Garissa early on Thursday morning no one knew that by the end of the day 148 would be dead, constituting Kenya’s deadliest terrorist attack in 17 years.

What most Kenyans did know is that they had lost faith in their government’s ability to keep Kenya safe from al-Shabab’s increasingly deadly presence. Since 2011, it is estimated that more than 300 people have been killed by terrorist attacks in Kenya.

“This is an issue of security and the government. It’s not an issue that is starting now — it’s been an issue that has been going on for a while. The security matter should be taken seriously and they’ve completely neglected the issue,” said Hussein Malaam, a student at University College of Garissa who was awoken early on the morning of the attacks by a phone call from a friend warning him not to go to school. That was when Malaam started to hear gunshots coming from the nearby university.

The gunmen first fired indiscriminately into the campus before zeroing in on students in their dormitories, most of whom were fast asleep when the attack started. By midmorning, students had been evacuated from three of four of the student hostels. At the last hostel, gunmen reportedly separated Muslim students out for freedom, taking non-Muslim students hostage or executing them on the spot.

“The people were trapped here for 13 hours — where was the government? They failed to protect their people,” said Farhiya Haji, a high school student from a nearby village who had walked two hours the day after the attack to see what was happening for herself at the gates of the university. “We don’t feel safe here and the government isn’t doing anything to protect us.”

By Saturday, most surviving students had been bused to Nairobi to be reunited with their families. Those critically injured had been airlifted to the capital city in the preceding days. Around midmorning, emergency response teams received word that several surviving students had been found in the university. They had climbed the rafters to hide in the ceiling, waiting there for days as security teams cleared the university of remaining students.

The four terrorists were killed and their bodies were brought to the morgue at Garissa Hospital on Saturday where local and international forensics teams performed autopsies. The bodies, bloating and rotting in northeastern Kenya’s sweltering sun, were then displayed at Garissa Primary School for the community, searching for a sense of justice or certainty, to see.

A spokesman for the Interior Ministry told the Associated Press on Sunday that one of the gunmen was identified as the son of a Kenyan government official, a law graduate who was reported missing last year and thought to have traveled to Somalia.

Kenya’s security situation has continued to deteriorate since the 2013 attack on Nairobi’s Westgate Mall, where 67 people were killed. Late last year, al-Shabab militants carried out two attacks in Mandera, also in northern Kenya. In the first attack, 28 people were killed and in the second, 36. Both times gunmen identified Muslims and freed them while shooting or decapitating non-Muslims.

“It’s not that al-Shabab is so good at what they’re doing — the government just does such a terrible job that they make them look good. Al-Shabab is probably at its weakest point since 2006,” said Abdullahi B. Halakhe, a Nairobi-based East Africa researcher with Amnesty International.

The university is located just off Kismayo Road, the main drag that cuts through Garissa and stretches about 90 miles to the Somali border; a border whose porous nature is blamed for a great deal of the insecurity in Kenya. “It’s very clear that the Kenya police is probably the most corrupt institution in this country, folks crossing the border have to pay less than $200 and they can cross over,” said Halakhe, referring to the ease with which anyone, including al-Shabab, can enter Kenya.

“Entrenched corruption in the security system allows al-Shabab to move freely in and out of Kenya and carry out such attacks with ease,” said prominent Kenyan activist Boniface Mwangi in a statement online.

Kenya ranks as one of the most corrupt countries in the world, landing 145th out of 174 on Transparency International’s Global Corruption Perception Index. The Kenyan police rank as the most corrupt institution in Kenya.

Earlier in the week, Kenya’s Ethics and Anti-Corruption Commission published a report detailing allegations of corruption against 175 government officials. In a potentially positive step, President Uhuru Kenyatta made a speech in response to the report pressuring the public officials named to step down pending investigations. Five ministers have done so.

“The biggest problem in this country that needs to be tackled is corruption. Corruption is the biggest contribution to insecurity in this country. Its an impediment to everything — without it we could be a very rich nation,” said Hassan Sheikh Ali, the former leader of Garissa University.

In an address to the nation on Saturday, Kenyatta reiterated his concern about “the pervasive threat of corruption to our aspirations as a people.

“What else but corruption of the worst and most criminal kind,” he continued, “is it for Kenyans to finance, hide and recruit on behalf of al-Shabab?”

In addition to worries about corruption, many have accused the Kenyan government of not taking credible security threats seriously. “There was no doubt that northeastern Kenya has become insecure,” said Rashid Abdi, an Independent Horn of Africa analyst. “I think there was enough intelligence that education institutions and basically any facilities with non-Muslims in northeastern Kenya were at risk; I’m surprised that that college wasn’t sufficiently protected.”

Universities across Kenya had issued security warnings in the weeks preceding the attacks including on March 25 when the chief security officer of the University of Nairobi issued a terror-threat alert that stated, “Intelligence reports indicate that the al-Shabab terror group is planning retaliatory attacks on vital installations in Nairobi including a major university.”

Britain and Australia also issued fresh travel advisories earlier in the week, warning citizens of Kenya’s increasing insecurity. President Kenyatta fired back, stating that Kenya was as safe as anywhere else. “The travel advisories being issued by our friends are not genuine. I have not heard of any travel advisory issued to those visiting Paris, which recently experienced a terror attack,” he said.

Al-Shabab has consistently attributed its attacks on Kenyan soil to Kenya’s 2011 invasion of Somalia. Titled Operation Linda Nchi, the invasion was allegedly in response to the kidnapping of Westerners in northeastern Kenya. “Since October 2011, Kenya has been the most insecure that we have seen in decades. If going into Somalia was to secure Kenya, then they have failed,” said Halakhe. “The elephant in the room [is] what is Kenya’s plan as far as Somalia is concerned?” added Halakhe. “What does the exit plan look like? Is it two years, is it three years?”

President Kenyatta responded to the attacks by saying, “I also assure the nation that my government has undertaken appropriate deployment to the affected area, and is fully seized of the situation … This is a moment for everyone throughout the country to be vigilant as we continue to confront and defeat our enemies.”

He also directed the inspector general of police to fast-track the enrollment of 10,000 police recruits, saying, “We have suffered unnecessarily due to shortage of security personnel. Kenya badly needs additional officers, and I will not keep the nation waiting.”

Even this move, however, has come under criticism as the initial reason for the delayed enrollment of the 10,000 recruits was concerns over irregularities and corruption during the recruitment process.

“The selection process is flawed, favoring brawn to brains as thousands of unemployed graduates languish. The working conditions are terrible and the primary motivation for many recruits joining the police force is the bribery paradise they work in,” said Mwangi, the activist. “The fact that it took the police over 10 hours to contain four gunmen calls into question their standards of training as well.”

For the hundreds of surviving students at the University of Garissa, and for the families of those killed, the results of these politics are all too real. “I spent the day at the hospital and the morgue trying to find my missing friends,” said Malaam. “I went to the mortuary and I became so scared. Especially when I saw someone I knew. You feel so bad when you see a friend of yours who has been killed.” 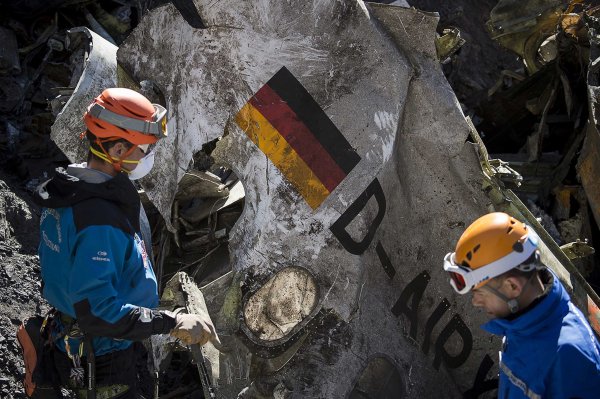 Germany's Aviation Oversight Faulted Ahead of Crash
Next Up: Editor's Pick