The Rock, fresh off his fantastic Saturday Night Live hosting gig, opened the show with a spirited take on Taylor Swift’s “Shake it Off.” The Furious 7 star put his massive frame to use while shaking it off to the music and in a move straight out of the WWE taunting playbook, wagging his finger in Fallon’s face.

The best part of the performance might be the realization that there is no way The Rock got this good at this song without engaging in a lot of Taylor Swift car karaoke. Of course he’s not the only celebrity caught singing along to the earworm. (Check out TIME’s list of the six best celebrity covers of “Shake It Off.”)

Round two featured Fallon tackling Madonna’s “Like A Prayer” with a full choir, while Johnson delivered a dazzling, hip-swiveling version of the Bee Gee’s “Staying Alive.” 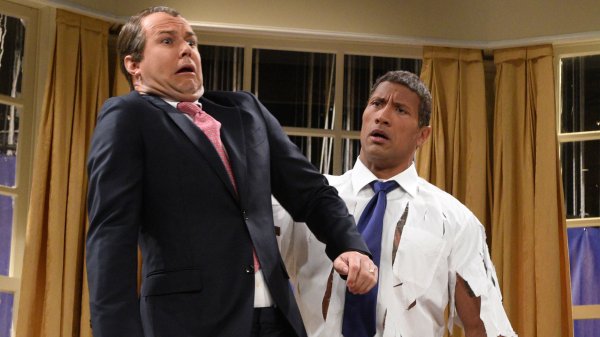 Watch 'The Rock Obama' Throw Boehner Out a Window on <i>SNL</i>
Next Up: Editor's Pick