A bill signed Thursday by Gov. Sam Brownback will allow residents in Kansas to carry concealed firearms without a permit or training.

Kansans aged 21 or older will be permitted to carry concealed guns starting July 1 when the law takes effect, even if they’re not trained or don’t have a permit, the Kansas City Star reports. That will make the state one of six to allow “constitutional carry.”

Anyone who would like to carry a concealed gun in any of the three dozen states that accept Kansas permits must go through training, a requirement that Brownback emphasized. But even with regard to Kansans, who won’t be required to go through training, he acknowledged that his youngest son had “got a lot out of” a hunter safety course recently and urged others “to take advantage of that.”

“We’re saying that if you want to do that in this state, then you don’t have to get the permission slip from the government,” Brownback said. “It is a constitutional right, and we’re removing a barrier to that right.”

The Kansas State Rifle Association was supportive of the bill. A statement on its website reads: “the right to keep and bear arms is a natural, unalienable right protected by the Second Amendment and citizens should not have to go through burdensome and expensive hoops to exercise that right.” 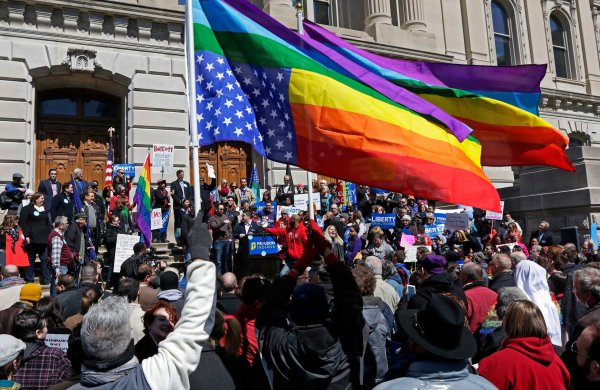 How Gay Rights Won in Indiana
Next Up: Editor's Pick