President Obama arrived Thursday night in Utah, with plans to deliver remarks at Hill Air Force base. The event is pretty standard Obama fare—he’ll focus on jobs—but the location itself is significant in its own right. The late-week trip marks the President’s first trip to the beehive state while in office, and the 49th state he’s visited as commander-in-chief.

After the trip, there will be only one state the President hasn’t visited—South Dakota. And the people there have a message for the White House: Don’t forget us.

The White House has yet to announce plans for Obama to travel to the state, but to prominent South Dakotans, there are plenty of reasons why he should visit. In the words of Republican Senator John Thune, his home state’s got a lot to offer. “I hope the president finds time to visit our beautiful state and meet the honest and hardworking people who call it home,” he tells TIME via email.

Republican Rep. Kristi Noem says he could learn a thing or two from the state, home to one of the nation’s lowest unemployment rates. “A visit to South Dakota would show the President what happens when an efficient, effective, and accountable government respects hardworking taxpayers: you get an unemployment rate under 4 percent, a balanced budget, a better lifestyle, and a healthy economy,” an email from Noem reads.

Plus, there are all of the great attractions (Mount Rushmore, hello!), says the state’s Secretary of Tourism, Jim Hagen, some of which are celebrating some rather interesting milestones. The state is expecting 1 million visitors this summer for the 75th anniversary of the Sturgis motorcycle rally. “That could be interesting for him to attend!” Hagen laughs,

Custer State Park, which Hagen calls one of America’s “crown jewels,” will also celebrate the 50th anniversary of its famed buffalo roundup this September. “There are many states that may be able to claim, you know, better-well known attractions,” Hagen tells TIME. “But there are very few states that can claim iconic, really Americana attractions as South Dakota.”

To see it all, Hagen adds, it would probably take the president about a week. Unfortunately, commanders-in-chief don’t have that kind of time, which is one of the main reason author and U.S. Naval Academy political science professor Brendan Doherty says so many states miss out on presidential pop-ins. “Time is the president’s scarcest resource,” Doherty says, noting that of the most modern Presidents’ only Bill Clinton and George H.W. Bush were able to visit all 50 states—a surprising feat for Bush, too, given the fact that he was only in office one term.

And though Presidents like to be seen as leaders of all Americans, they also tend to visit states where a visit can benefit themselves or their party in some way. As Doherty notes in his book, The Rise of the President’s Permanent Campaign, most of the states that president’s neglected to visit between 1977 and 2011 were “sparsely populated and electorally noncompetitive and had voted for the Republican presidential nominee in the previous election.” South Dakota is all three. Obama lost to Romney by 18 points in 2012 and by 8 points in 2008. It’s the 46th most populous state, according to the U.S. Census. In fact, it’s among one of the least visited states by a sitting president, having received no presidential visitors during four out of the last nine presidential terms.

And yet, with Obama being 7 years into his presidency and on his 49th state, Doherty says the president may soon check visiting the Mount Rushmore state off of his bucket-list. “It’s interesting that President Obama is on track,” Doherty says. He may have a good reason to give South Dakota a visit soon, too. Next year will mark the 75th anniversary of the completion of Mount Rushmore; President George H.W. Bush spoke at its 50th Anniversary celebration.

But, Hagen is ready whenever he decides to stop through. “I’m convinced he’s saving the best for last,” Hagen tells TIME. “When he can fit it into his busy schedule we’ll certainly be honored and happy to host him.” 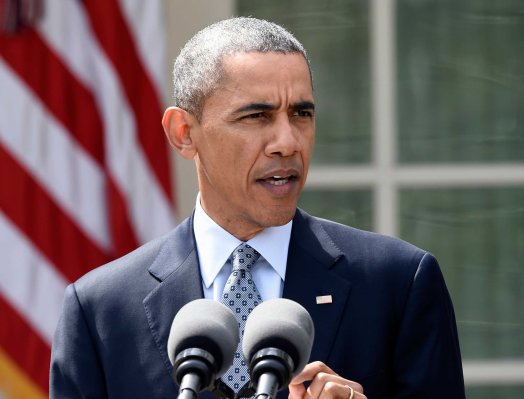