The landscape for fantasy shows on television has changed a lot since Xena: Warrior Princess first graced screens 20 years ago: try darker, extra twisted and loaded with more OMG moments than ever. “When I was coming out, with Xena and Buffy, that was kicking-ass girl hero stuff,” says Lucy Lawlesss, who joins the cast of WGN America’s Salem for its second season. “This is women kicking ass but in an extremely negative way. It’s like all the heroes are anti-heroes, and you have to be good with that to handle a show like Salem.”

In Salem, which returns this Sunday at 10 p.m., Lawless plays Countess Marburg, the last in a long line of ancient Germanic witches who poses a threat to Salem’s most powerful witch (Mary Sibley, played by Janet Montgomery) when she makes her way to the 17th century town. TIME caught up with the actress to talk about pop culture’s witch renaissance, the modern-day relevance of the Salem witch trials and what happened to the Xena costume.

TIME: The last time I saw you on television was Parks and Recreation. Is it nice to be back in the fantasy realm?

Lucy Lawless: It is! The form of this shooting was how I was raised in the business. I actually started out in comedy, but where I really grew up was in one-hour dramas. It is a bit of a home-coming, actually.

Salem is about witches, obviously, but the character you play is no ordinary witch.

I come from a very old line of witches that have had many incarnations and have made names. These are famous witches in history called Hecate. Contemporary accounts have given us quite a lot of stories about these witches. Whether they were rumor or not, we’ve got lots of great information about how they’ve lived and what made them so terrifying. I cherry-pick some of those awful awful stories and feed them into my character. The horrifying things that she does — like her beauty regime, for example — are stolen from historical accounts of witches in history.

Are you a history buff? Do you find yourself in late-night Wikipedia spirals?

The show presents me with all the challenge I can handle. There are times when I collapse my hand to my forehead and think, “How can these guys write this horrible stuff?” Just when you’re about to accuse [Salem creators] Adam Simon and Brannon Braga of being really sick, they’ll show you, “Here’s anecdotal evidence of people at the time!” These are real historical characters, which is the most horrifying thing. What you think is twisted fantasy, turns out somebody’s done it!

Well, you know what they say, the truth is stranger than fiction.

So much stranger! I was raised watching a lot of horror, and Dracula tales were very popular in my home, but this is a new kind of horror.

What makes it so?

The temptation is when you look at it, it’s a beautiful historical drama, but it’s not. It has that sumptuousness. The acting is so beautifully filmic, and nobody’s shooting thunderbolts or got a wand or anything goofy like that. Horror when I grew up was cheesy and you knew you were watching it. This is so high-end that you could be forgiven for thinking it is a historical account of something. In fact, it’s very educated horror. This is so high-end.

Oh I know, and the water-cooler moments! These days you have to have one or two of them in every show, things that nobody’s ever seen on television before. There’s some pretty twisted stuff.

Like the scene in the first episode in which a man’s genitals are magically replaced with a raven’s head?

Now, we’re not saying that that ever happened. But there will be a historical account where there rumor was somebody did that. Adam Simon is quite the historian himself. He’s done a great deal of research.

What parts of the supernatural does Salem explore that you haven’t seen before?

Well, there’s the replacement of some body parts with animal heads, but my character really doesn’t indulge in that jiggery-pokery. She’s a much more serious piece of work. Despite her charms and her wits and her elegance and her generosity, she is the soul of violence, and don’t you forget it!

With this show, American Horror Story: Coven and the news that Orange Is the New Black creator Jenji Kohan is developing a show also about the Salem witch trials, are witches having a pop-culture renaissance?

Yeah, that’s interesting, eh? When I was coming out with Xena and Buffy, that was kicking-ass girl hero stuff. This is women kicking ass but in an extremely negative way. It’s like all the heroes are anti-heroes, and you have to be good with that to handle a show like Salem.

Oh, I never even thought of that — it seems to be! That was quite shocking to me, to be honest, when I watched it. I’m used to the hero being aspirational, like Spartacus. You relate to them and they are carrying your hopes and dreams with them. Not anymore! The storytelling is much more complex than it used to be.

And I believe there is some sort of uptick of interest in Wicca in America. I don’t know really what that means. I’m quite interested in dealing with real things like climate change and getting your kids through school in one piece rather than looking for trouble in the occult. But I believe that Wicca has caught a bit of a wave.

What is it about the Salem witch trials that makes them so relevant for modern reinterpretation?

Witch trials are really about the suppression of ideas. When conventional religious constructs become bullies, as we see happening in the Middle East or many places of the world, you’ve got rich pickings for a television show. It’s happening everywhere. It happens in the South.

I didn’t even think about the Middle East relevance — the story of Salem is so tied up in early American history for me.

I’ve experienced it myself as a protester in liberal New Zealand. You can’t believe the world of blowback you get for just daring to go up against an oil company. “How dare you? Who do you think you are that you should climb an oil rig and protest climate change?” As if you’re being a showoff! It’s the bullying and the herd mentality of expressing an opinion that is contrary to the mainstream.

What’s the best part about playing a witch?

Are you all superstitious on set?

No, we’re in the buckle of the Bible Belt here, my friend! [The show films in Louisiana.] People are very, very religious, and they take their religion straight-laced — they like it neat. I’m often being invited to church. I haven’t gone yet. But even though we’re in the Bible Belt, there’s no weirdness, which is a good thing. I bet if you go to some churches, you’ll be prayed over just for being on a witchy show.

Ha! I really want to know where the outfit is. Do you have it at home, or is it in a box in a warehouse somewhere?

I think I sent it to the Smithsonian, which had it mixed in with Fonzie’s jacket for a while, but I don’t know where it is now.

Did the museum lose it? Let’s hunt it down. 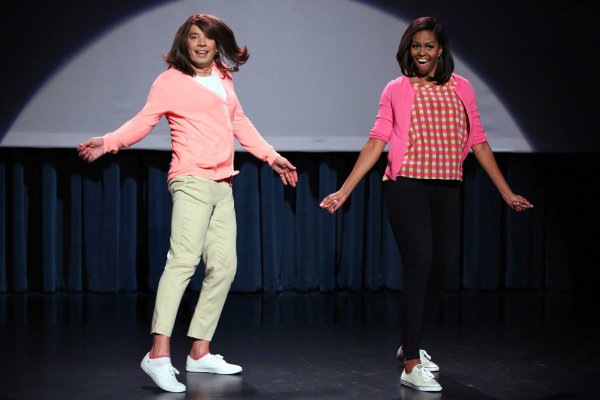 Watch Michelle Obama and Jimmy Fallon Dance Like Moms
Next Up: Editor's Pick