This Is How Drones Work

When things look easy, they’re typically anything but. From Ted Williams’ swing to Raymond Carver’s prose to Jennifer Lawrence’s acting, this has been demonstrated time and time again. You might think it’s a leap to include drones with these effortless artists, but hold your judgement until after you watch an unmanned aircraft dance gracefully across the sky. Because while these machines may look like little more than propellers and plastic, these aerial acrobats actually pack a lot of tech into their lightweight frames.

In order to describe how drones work, you have to first distinguish them from their predecessors: remote control helicopters. According to Michael Perry, public relations manager at drone maker DJI, the key differentiator between the two airborne devices is that drones have some level of autonomy — meaning they can fly, hover, or navigate without input from a pilot.

“When you’re fully engaged with every single part of the flight process, that’s technically not a drone.” says Perry. “The ability to self-stabilize, to be able to hold a GPS-based position, that’s the level of autonomy that actually makes it an intelligent machine.”

This detail is key when you analyze one obvious differences between model aeronautics and drones: smart copters have multiple rotors. While RC copters also can have multiple propellors, hobbyist drones (not the ones flown government or the military) need them in order to achieve the level of control necessary for the unmanned aerial vehicle to be self-reliant.

“When you have multiple rotors, you get a lot of really interesting benefits,” says Perry. For instance, having more than one propeller gives drones more fail-safes. For instance, if one of the motors fails, the aircraft can still stay aloft with the remaining motors working in concert to compensate. In addition, the more rotors that you have, the more lift an aircraft will generate, allowing it to carry a heavier payload, something that comes in handy when you’re attaching a camera to a drone. And finally, having more rotors lets designers shrink the size of the blades, making them more manageable and even safer to use.

But it takes a power source to get these propellors spinning. Drones typically come with a removable battery that provides around 12 minutes of flight time. Many drone makers sell extra batteries, and you can even upgrade them to get up to 25 minutes of flight. But more power means more weight, which is why these machines get such little airtime. Everyone would love to have a drone that flies for hours on end, but the battery powerful enough to do that would act like an anchor, tying it to the ground.

In order to take flight, drones require a controller, something the pilot uses to launch, land, and navigate. Controllers can take many forms, from gamepad-like controllers to smartphones and tablets. Regardless of how they look, controllers need to communicate with the drone, and typically do that using radio waves. According to Perry, drones are typically run by 2.4 gigahertz radio waves. To communicate with their aircraft, many drone controllers use Wi-Fi, which can be transmitted on the 2.4 gigahertz spectrum, and is something that smartphones and tablets can tap into without any accessories.

Not coincidentally, drones have adopted an array of onboard technology also developed by the smartphone revolution. One is a GPS chip inside the aircraft that relays its location to the controller. It also logs the aircraft’s takeoff spot in case it needs to return unassisted. Gyroscopes, the kind that are found in smartphones’ accelerometers, are also crucial.

“Those accelerometers have gotten smaller, more affordable, and more powerful, making them able to give a lot more information,” says Perry. “We’ve been able to take that size, cost, and power differential and put it into the platform to make something that’s even more accessible to everybody.” And the shift in both price and power has propelled the drone boom.

When it comes to flying, these onboard sensors keep drones aloft. For instance, an altimeter lets the drone know what altitude it’s at. So, when you set the aircraft to hover in place, this chip will tell the drone to maintain that height. In addition, the GPS chip helps to hold the drone within the x and z axes, correcting course when stiff winds blow it around. And these machines are no pushovers, says Perry, who says DJI’s larger rigs can withstand gusts of up to 50 miles per hour.

But landing, as Indiana Jones will attest, can be even more challenging. Drones are programmed to automatically land slowly, a necessity for propellor-based craft. “When you descend quickly there’s a state that’s well known to helicopter pilots called the vortex ring state,” says Perry. While drones may not know it by name, they can certainly feel it, because when they drop in altitude too quickly, they end up sinking into the wash of their own propellors. This vacuum of air is hard to escape even for seasoned pilots (of remote controlled or real helicopters), because when they throttle up to escape, they create an even stronger vacuum that pulls the aircraft down even faster.

But these are just the first advances to propel drones, and there will be plenty more as as technology drifts onward. For example, tapping into its onboard camera, the DJI Aspire 1 has a visual positioning system which uses a downward facing camera and two ultrasonic sensors to land. A key feature for flying indoors or somewhere without GPS, the camera creates a real-time map of the ground below, identifying a grid where it can plot points and safe places to land. If the drone drifts away from the points, it can visually triangulate to correct itself and stay locked in position. Meanwhile, the ultrasonic sensors tell the drone how close it is to the ground. In other words, even in harsh terrain, technology can make landing a drone look easy. 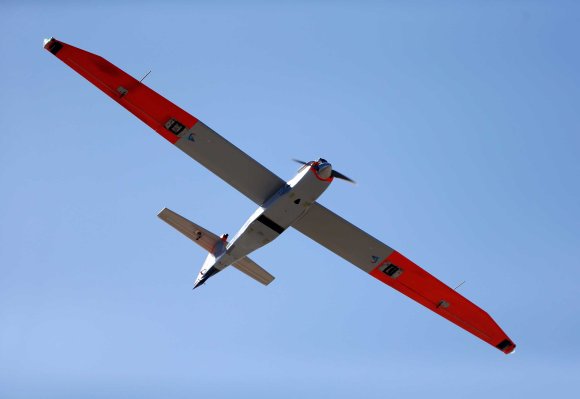