California's Water Crisis By the Numbers

Rice harvested by Mike DeWitt is loaded into trucks near Davis, Calif., Oct. 10, 2014. DeWitt is among the Sacramento Valley farmers who planted 25 percent less rice than normal because of water cutbacks.
Rich Pedroncelli—AP
By Josh Sanburn

California Governor Jerry Brown on Wednesday imposed historic water controls on the drought-stricken state. But who will the burden of conserving water fall upon? Here, nine numbers that explain the new measures:

25%
The amount by which cities and towns across the state must reduce water use under Brown’s new regulations. That would total about 487.5 billion gallons of water over the next nine months.

50 million square feet
The area of lawns throughout the state to be replaced by “drought tolerant landscaping,” in partnership with local governments. The plan will also require university campuses, golf courses and cemeteries to make “significant cuts” in water use, Brown said.

38 billion gallons
The amount of water used every day throughout California according to 2010 estimates, more than any other state in the country.

16.6%
The average share of water consumption in the U.S. that goes toward domestic purposes, according to the U.S. Geological Survey, such as washing dishes or drinking water.

80-100 gallons
The amount of water the average American goes through a day, much of it in the bathroom, according to the USGS. Showers use on average two to two-and-a-half gallons per minute. A full tub holds an estimated 36 gallons. Washing your hands and face take a gallon, while toilet flushes in older models use three gallons. (Newer ones use closer to one and a half.) Washers also go through a significant amount of water: about 25 gallons a load in newer models.

70 gallons
The amount of water used by San Francisco Bay Area residents after Brown asked Californians to voluntarily reduce water use by 20%. Some in Southern California continued to use some 300 gallons a day on amenities such as lawns and swimming pools.

$10,000
The possible daily fine for those of California’s 400 local water agencies who fail to meet the governor’s 25% target.

61%
The average share of the nation’s water that is used for agricultural purposes, including irrigation and livestock (Another 17.4% goes to thermoelectric power plants). In California that share is about 80%. 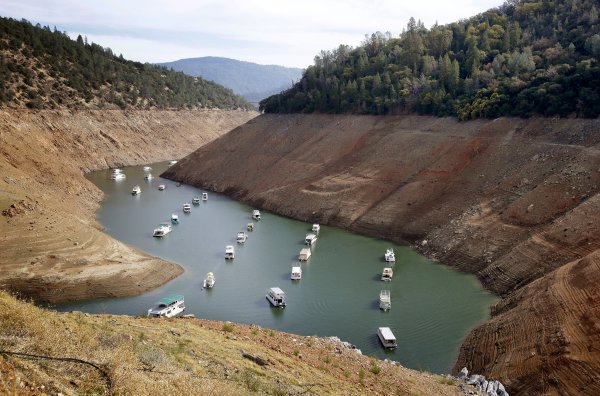 3 Maps That Explain Why California Is Restricting Water
Next Up: Editor's Pick