Identical Triplets in Brazil Get Married at the Same Wedding

It’s not every day you see three brides walk down the same aisle in the same dress and same hair style.

And yet, that was the case for Rafaela, Rochele and Tagiane Bini, who all got married at the same time at the Nossa Senhora Aparecida Catholic cathedral in their hometown of Passo Fundo, Brazil on Saturday, according to a BBC video.

The 29-year-old brides didn’t plan to match hairstyles or makeup. In fact, they went to their appointments with the intention of not matching.

“We tried a number of styles, but we all liked the same one,” Rochele told the Daily Mail. “It’s not even worth trying, it always ends up like that.”

The female guests were pleased to have three opportunities to catch the bouquets, which matched the color of each of the 18 bridesmaid’s dresses to the corresponding bride.

The only thing that helped their guests and grooms – Rafael, Gabriel and Eduardo – distinguish between them was their different colored bouquets.

But on their wedding day, they didn’t have a problem spotting their true loves.

“Oh yes, I knew which one was mine, for sure. I knew as soon as she entered the church, she was the most beautiful,” Eduardo, who married Tagiane, told the news outlet.

Rafaela met Rafael 10 years ago in college, and a year later Rochele met her future husband Gabriel. After Tagiane and Eduardo got engaged, their parents, Pedro and Salete, suggested that the girls get married together.

When it came time to decide how Pedro was going to walk all three daughters down the aisle at once, it was settled that he would walk halfway down the aisle with all three and then take one at a time to the altar.

Pedro walked Tagiane, the first born, down the aisle first.

“I tried to hold back my emotion, but I couldn’t,” Tagiane admitted. “To see my dad there, at that moment, was a feeling I can’t explain.” 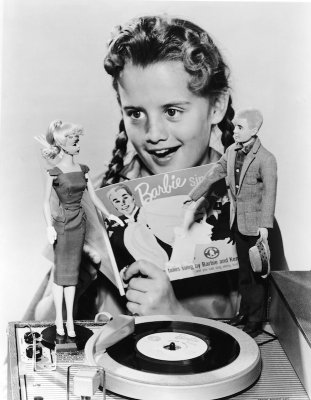 The Barbie Doll's Not-for-Kids Origins
Next Up: Editor's Pick