An Indiana pizzeria remained closed on Wednesday, embroiled in a national debate after its owners said they would not cater gay weddings because of their religious beliefs.

“I don’t know if we will reopen, or if we can, if it’s safe to reopen,” co-owner Crystal O’Connor told TheBlaze TV. “We’re in hiding basically, staying in the house.”

The Walkerton, Ind., pizza parlor is the first business since Indiana passed the highly controversial Religious Freedom Restoration Act to publicly cite religious beliefs as justification to refuse a service to the LGBT community.

The owners said they would serve anybody who came into the restaurant regardless of sexual orientation, but drew the line at weddings. “If a gay couple came in and wanted us to provide pizzas for their wedding, we would have to say no. We are a Christian establishment,” O’Connor told local news outlet WBND-TV Tuesday evening.

The comments sparked social-media uproar, and the company’s Yelp page has been flooded with angry comments. Someone went so far as to buy the domain name www.memoriespizza.com to post a message against discrimination.

At the same time, people who support the owners’ stance have started a GoFundMe campaign aiming to “relieve the financial loss endured by the proprietors’ stand for faith.” The campaign has raised nearly $50,000 so far.

Indiana’s Religious Freedom Restoration Act is a law prohibiting the government from infringing on the religious beliefs of a business, organization or person. Critics of the bill say it can be used to justify discrimination against the LGBT community. 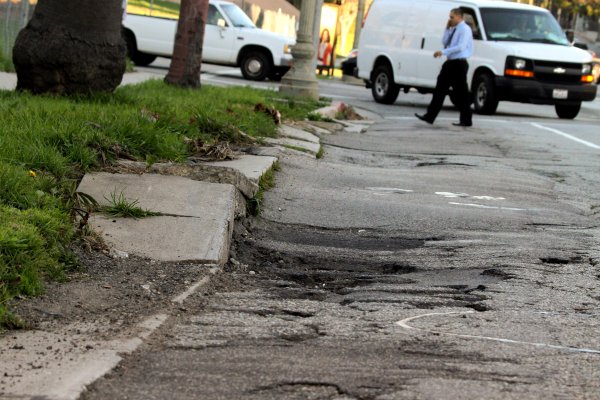 Los Angeles to Fix Crumbling Sidewalks
Next Up: Editor's Pick