For an election considered too close to call as Nigerians went to the polls en mass on Saturday morning, nothing was more surprising than the fact that for the first time in the country’s post-colonial history an opposition challenger succeeded in pushing out a sitting president via the ballot box. That and the fact that for all the dire predictions of doom and violence, the final results were accompanied by cheers and groans, not gloating and gunshots. Some of that just may be attributable to winning candidate Muhammadu Buhari’s remarkable Twitter feed, rife with positive thoughts and cheerful goodwill throughout.

Winning candidate Muhammadu Buhari, who will be sworn in as President on May 29, praised his rival President Goodluck Jonathan for peacefully relinquishing power. “President Jonathan was a worthy opponent and I extend the hand of fellowship to him,” Buhari told a gathering at his campaign headquarters on Wednesday. For his part, Jonathan, a former Vice-President turned two-time President who many had assumed would never willingly give up power, was gracious in his defeat, saying in a statement, “I promised the country free and fair elections. I have kept my word.” He went on to encourage his supporters to stay calm and accept the results, no matter how disappointed. “Nobody’s ambition is worth the blood of any Nigerian. The unity, stability and progress of our dear country is more important than anything else.”

While there was no shortage of rancor through out the campaign period — at one point Jonathan supporters spread the rumor that a long-planned speaking engagement for Buhari, 72, in the United States was in fact an emergency medical consultation for suspected prostate cancer — both candidates repeatedly professed a desire for a peaceful election and a mature, responsible electorate. By and large they got it, with minimal damage from protestors and a relatively low death toll of just a few dozen, compared to the slaughter of the 2011 election, which saw more than 800 die in widespread rioting. For most of the run up to the election, Buhari supporters and campaign activists hinted at dark conspiracies by Jonathan’s People’s Democratic Party to rig the vote, prevent Buhari supporters from going to the polls, or manipulate the final count.

But throughout it all Buhari’s Twitter feed focused on the positive, rarely betraying the acrimony splashed across Nigeria’s partisan papers. Buhari came late to Twitter, signing on only on the last day of January with the verified handle @ThisIsBuhari, compared to early adopter Jonathan. Buhari demonstrated few of Jonathan’s grievous faux pas, among them the ill conceived #BringBackJonathan hashtag campaign for re-election, a tasteless imitation of the #BringBackOurGirls hashtag slogan to recover the 257 schoolgirls kidnapped by Boko Haram last year. From earnest shoutouts to female candidates for state governor:

To exhortations for Nigerians to stay calm in the wake of terror attacks:

His final twitter missive to Nigerians, spelled out over 50 successive posts, qualifies as one of the more novel campaign uses of a medium designed to be brief.

Even when U.S and European officials expressed concern that there might be military and government manipulation in the final counting of the votes on Monday, Buhari urged his supporters to stay calm:

Most endearing of all was a tweet not scripted by Buhari himself, but retweeted in honor of his wife:

But after the celebrations come thorny issues such as taking on the Islamist militants Boko Haram. In a speech on Wednesday, Buhari said: “Boko Haram will soon know the strength of our collective will. We should spare no effort until we defeat terrorism.” 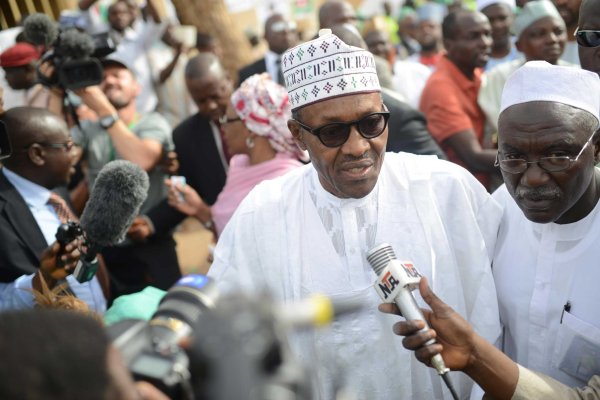