Aubrey Plaza on Life After Parks, Playing a Witch and Hating the Word 'Deadpan'

It’s been a little more than a month since Parks and Recreation bowed out, and Aubrey Plaza — almost in April Ludgate fashion — doesn’t know what her future looks like. In fact, after seven seasons of playing the slacker intern-turned-bureaucrat, she prefers it that way. “Right now I’m just really excited about the idea of having my entire year open,” the actress tells TIME. “There are so many things in the past couple of years that I haven’t been able to do because I’ve been booked for half the year.”

If her recent, prolific filmography is any indication — she’s been in five films since August, if you count Lifetime’s Grumpy Cat special — expect to see plenty more of her. “I really like working, and there’s no reason for me not to go crazy right now,” Plaza says. Two of her newest films are already on video-on-demand: in Hal Hartley’s Ned Rifle, available on Vimeo, she plays Susan, a mysterious poetry grad student who seems obsessed with the title character’s Nobel-laureate uncle; she also plays performance artist Mallory in Playing It Cool, a rom-com about a reluctant rom-com writer (meta!) that stars Chris Evans and Michelle Monaghan and is available on iTunes.

TIME caught up with the actress to chat about her recent SXSW excursion, the challenges of being typecast and the perks of playing Natasha Lyonne’s love interest.

TIME: You had two films at SXSW. Did you get to see other movies and bands and eat breakfast tacos, or was it all business?

Aubrey Plaza: It was fun. It was, you know, like a film festival — it was fine. [Laughs] It was a lot of business, but I did get to see Busta Rhymes, which was pretty awesome.

Are you a big Busta fan?

I mean, who isn’t? And I definitely ate some late-night Austin food — I went crazy on the food trucks at one point.

You were a big fan of Hal Hartley’s work in the ’90s before you starred in Ned Rifle. Can you write a creepy, extensive dissertation on his work like your character Susan does in the film?

Oh yeah, I can do that, and I can stalk him! [Laughs] I love him, I really do. I think he’s so special and important. There’s just not a lot filmmakers around that are like him. I was so, so excited to work with him.

Your character walks the line between joking around and being serious. There were a lot of parts in this movie where I wasn’t sure if I should be laughing, which was unsettling at first, but then I think that’s what made the movie so thought-provoking and delightfully weird.

At SXSW, Hal and I were doing interviews, and someone brought up the word deadpan, which for me is a word that I’m like, “Ugh, please, God, I don’t want to hear that word anymore.” It has a weird, negative [connotation] for me. But Hal embraced it and pointed that what you’re saying when things are deadpan, or a character is deadpan, is that they’re saying things without an obvious subtext. You’re not sure if it’s supposed to be funny or if it’s serious, and it leaves the audience to decide, which I thought was kind of cool.

It is more interesting that way—you’re not really sure how to interpret a line of dialogue, or why someone is saying something. There’s a lot of that in his script. As an actor, I don’t think about what’s funny or what’s not funny. For me, it’s just all coming from a very sincere place of trying to express her, and myself, I guess. It never felt funny to me. I know it’s a dark comedy, but I never approached it like a comedy or anything like that. But there were moments on set when Hal would stop shooting and come over and say, “Don’t forget this is a comedy!” [Laughs] It’s hard to know! But that’s one of the reasons why I love his writing.

You’ve talked before about not wanting to be typecast, but looking at the different roles you’ve played, do you think there is some through-line or something they have in common that you’re drawn to?

I’m just like everyone else reading scripts and trying to get parts. There’s definitely the struggle that I have, always trying to convince people that I can play parts that are really different on paper from things I’ve done in the past. I like it — it’s a really fun challenge to audition for parts that people wouldn’t normally believe that I could pull off. But I don’t have perspective on myself in that way where I can look at all the characters. I mean, it’s me — I bring all I have to every character with my own experiences and my own approach to life, so of course there’s a through-line there. I’m sure that’s true with every actor.

How actively do you seek out roles that are different to challenge those perceptions?

All the time, but the opportunities do not present themselves to me as much as I would like. I’m shooting a movie right now called Dirty Grandpa with Robert DeNiro and Zac Efron. It’s a comedy, and there are two main girl parts: one is Zac’s love interest, who is funny and sarcastic [and whom] initially I was going to audition for. The other is this super slutty party girl who just wants to party. People would be thinking that I would want to seek out the sarcastic girl, but I didn’t. I actually wanted to audition for the other part. So I did, and they cast me in that part, and it was very exciting that the director believed I could pull this thing off.

But, you know, there’s a limited control that you have as an actor, and there are a lot of things that are offered to you [that are] unfortunately a lot of the same. Once someone sees you do one thing, they just want to see you do it over and over again. It’s tricky to navigate that, but I do my best. Mainly I just want to work with good filmmakers that I respect and pick parts that I really connect with.

You’ve been in so many movies since last August, when did you have time for them all? You were still shooting Parks last year!

I don’t know, I’ve just gone insane. I don’t know if I will continue to cram in 20 movies a year now that Parks is over, but I really like working, and there’s no reason for me not to go crazy right now. Right now I’m just really excited about the idea of having my entire year open. There are so many things in the past couple of years that I haven’t been able to do because I’ve been booked for half the year. I have hobbies and I’ll get there, but I’m just kind of really excited about working. I’ll probably just work all the time.

Are you open to going back to TV, or are you sticking with movies for now?

I’m open to it for sure, but it would have to be the right thing. I don’t have any prejudice against television or anything like that. The quality of television programming is so good right now that it would be silly not to not to do another TV show. But there’s something about movies that I find so satisfying, just that it has a very clear beginning and end. I really like going through those experiences.

Another movie of yours is Playing It Cool, which, like Ned Rifle, is on video-on-demand now and will have a limited run in theaters. That movie seems like a pretty self-aware rom-com, which is refreshing.

I don’t even know what they ended up using because I haven’t seen it. It’s bizarre. I believe I’m in my underwear, and I’m fake giving birth to different baby doll parts and pulling them out of my vagina.

That is bizarre. And then you’ve got Fresno, in which you play Natasha Lyonne’s love interest.

Yeah, I play a lesbian krav maga instructor, which is a really different part for me — the reason why I did that movie. I thought it’d be fun to play a really physical part and to play a gay character, which I haven’t done before. Natasha and I are friends in real life, so I thought it would be really fun to play opposite her. And it was not hard to be attracted to her, because I am.

I was recently talking with Lucy Lawless, who’s on the new season of Salem, about why witches are having a pop-culture moment. As someone with the Twitter handle @evilhag, do you have any insight?

I had no idea! That’s so exciting. Witches go in and out as being popular. I remember when I was in high school and The Craft came out, that was a huge thing for me. I loved that movie so much. They’re fascinating. I would love to play one.

So you’re game for a role in the fantasy and sci-fi realm?

I would do anything if it was good. Really! It would be so fun to do something in the fantasy world. That’s the reason I wanted to be an actor — so I could do things that don’t happen in reality. I would love to do that some day. Any kind of magical powers, that’s very appealing to me. 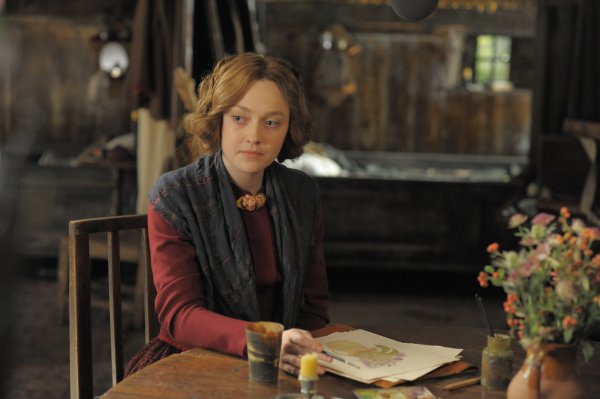 The Unsettling Legend Behind the Broken Marriage in Effie Gray
Next Up: Editor's Pick