ISIS Floats Idea of Truce With West After Military Setbacks

A member of the Iraqi security forces runs to plant the national flag as they surround Tikrit during clashes to regain the city from Islamic State militants, 80 miles north of Baghdad, Iraq, March 30, 2015.
Khalid Mohammed—AP
By Harvey Morris

After a series of battlefield setbacks, the Islamic State of Iraq and Greater Syria (ISIS) this week raised the prospect of an eventual truce with Western states that have joined the struggle to defeat it.

The idea emerged in Tuesday’s latest edition of Dabiq, the militants’ glossy English-language online magazine, in an article purportedly written by John Cantlie, a British war photographer the group has held hostage since November 2012.

ISIS has previously disseminated videos of Cantlie from various locations that the group controls in Syria and Iraq in which he was seen countering Western accounts of life under its rule.

The author of the Dabiq article, titled “Paradigm Shift”, claims to detect a change in the Western view of ISIS from seeing it as a terrorist organization to accepting it is a country in its own right.

“Although the West might never admit such a thing, there are Western politicians who are beginning to realize this fact,” it reads, “and thus, little by little, we’re seeing a changing of vernacular, a paradigm shift in how those leaders talk about the State, because if it is a country – whether recognized by anyone or not (and the Islamic State doesn’t care either way) – then that changes things, dramatically.”

The article quotes comments from a number of current and retired U.S. officials to back its claim. It refers, for example, to retired U.S. Lieutenant Colonel Bill Cowan telling Fox News in October 2014: “ISIS will have taken more towns, more territory, consolidated more gains and really become, unfortunately, the kind of country we don’t want to see over there.”

Neither this or other quoted comments are very recent, raising the question of why the claim of a “paradigm shift” or a possible truce has been raised now. If not an oblique signal of the group’s present relative weakness, it might be an effort to drive a wedge between those who support and oppose further Western involvement in the anti-ISIS campaign.

The article insists Western bombing raids in support of badly-trained local forces will not work. And then comes the truce pitch: “At some stage, you’re going to have to face the Islamic State as a country, and even consider a truce.”

There is no way of establishing independently whether the article was written by Cantlie. A former hostage of ISIS, journalist Javier Espinosa, has said that Cantlie tried to escape twice with fellow photojournalist James Foley, who was beheaded by the militants last year. The attempts earned them weeks of harsh punishment.

In any event, the truce idea — floated in IS’s main English-language propaganda vehicle — must have the group’s approval.

The idea is raised in familiar triumphalist tones: “Is a truce even realistic?” the article asks. “Right now, it’s too early. The scene is just being set for a big operation against the Islamic State to be executed by Iranian militias (AKA the Iraqi army) backed by the US.

“But when that fails because Shiite militiamen are afraid of being burnt alive, when special forces operations skyrocket in an effort to make up for what the Iraqi army cannot achieve, and when the mujahedin start beheading Western troops, then every option is going to be on the table, and fast. A truce will be one of those options.” It insists that at some stage a truce will be the only option open to America and the West and “the sensible one”.

The article comes with an editor’s note that a halt of war between Muslims and the kuffar [infidels] can never be permanent, “as war against the kuffar is the default obligation upon the Muslims.” The note also demonstrates that as fundamentalist as ISIS claim to be, they are also permitted to be pragmatic as the point of the truce is to allow them to better achieve their strategic aims in future.

The confident predictions on behalf of ISIS are at odds with the current situation on the ground, where the militants have been mostly expelled from the Iraqi city of Tikrit in the face of an Iraqi army and militia advance. Elsewhere in Iraq, local forces, including the Kurdish Peshmerga, have pushed back the ISIS front line with the support of U.S. and other allied air strikes.

In Syria, ISIS militants were ousted from the Kurdish border town of Kobane after a lengthy siege last year. The Dabiq article even tries to portray that defeat as a victory by suggesting that the fighting left the town totally destroyed.

The “truce” article appears in the eighth edition of Dabiq, a glossily illustrated web magazine, designed to appeal to would-be recruits in the English-speaking world. Dabiq 8 continues a familiar pattern of glorifying ISIS’s violent acts and predicting the inevitability of its victory.

The current edition lauds the recruitment of child soldiers — the Lion Cubs of the Khalifah — and their role in the murder of hostages. It also praises the killers of more than 20 people, including foreign tourists, at the National Bardo Museum in Tunis on 18 March. “The operation succeeded in bringing anguish to a number of the nations involved in the crusader coalition (Italy, France, Britain, Japan, Poland, Australia, Spain, and Belgium), after some of their own citizens became prey for the soldiers of the Islamic State,” one article boasts. 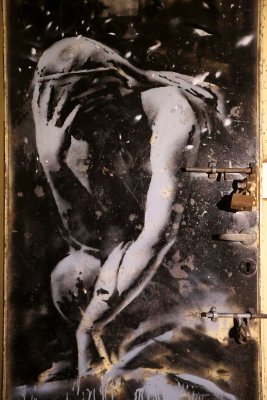 Gaza Man Tricked Into Selling Banksy Mural for $175
Next Up: Editor's Pick