“Severance,” the first of the last seven episodes of Mad Men, arrived on critics’ doorsteps recently along with the usual request from creator Matthew Weiner that we not reveal what year the new episode takes place in. I’m honoring that request here, partly because it’s not that significant, partly because some of the show’s fans care deeply enough about the secret, and partly because that secret is really a red herring.

See, the truth is, the new episode of Mad Men (which returns April 5) does not take place in any one year. Mad Men never does.

Mad Men is about a lot of things: history, business, love, family, sex, secrets. But its ultimate subject is time. In the first season’s finale, “The Wheel,” Don Draper said something about Kodak’s slide projector that has become a sort of an elevator pitch for Mad Men itself: “It’s a time machine.”

And sure it is, but not just in the Sherman-and-Peabody Wayback Machine sense. Mad Men is a complicated, quantum time machine that doesn’t go in a single direction or even exist at a single point in the continuum. It moves us backwards then takes us forwards; it delves into the history of its own history; it tells us that we are all live simultaneously in our past, our present and our future.

On the one hand, over seven seasons, the show’s simple but radical premise has been to say: Here is what it looks like, how it feels, for life to pass, in something close to real time. Most TV series distend time, deny it, cheat it. M*A*S*H took 11 years to fight a three-year war. Bart Simpson is still in grade school after 25 years.

Mad Men, on the other hand, has covered about a decade of its time in about a decade of our own. (The pilot, set in spring 1960, was shot in 2006; when we left the halls of SC&P last year, it was July 1969.) We see hair grow longer, hemlines shorter. Paul Kinsey’s blazers give way to Stan Rizzo’s fringe jackets. The children grow up (including four—count ’em, four—actors playing Bobby Draper). The colors get more saturated, the social mores more extreme, the cultural power shifting toward youth. Characters get prosperous, get fat, get lost.

It’s a potent effect: Just like in life, you don’t notice the gradual changes until you look back and—Jesus Christ—how far have they come? How far have we? Where has the time gone, besides into the creases of our foreheads?

At the same time, Mad Men‘s sense of history is so subtle and rich–and remarkably free of period clichés–because it’s constantly aware that the past has its own history. It’s Don Draper, flashing back to his impoverished life in the 1930s and his wandering days in California. It’s Conrad Hilton, dreaming of a hotel on the moon, yet driven by his memories of growing up in territorial New Mexico. It’s Betty’s dad, in 1963, pouring Don’s expensive alcohol down the sink because he thinks it’s still Prohibition. It’s Bobby Draper, in season six’s “The Flood,” tearing at his bedroom wallpaper to get at the wallpaper underneath. On Mad Men, history is a palimpsest. There is always wallpaper under the wallpaper.

Mad Men gets something essential about being human: we experience time both as a linear one-way trip forward and as a nonlinear four-dimensional space, where it’s always today and 20 years ago and every year you’ve ever lived through. Old people know this: the elderly will describe how a memory of a half-century ago can be more vivid than something that happened last week. It’s a perspective you rarely see in TV, as concerned as the medium is with youth, plot and the immediate moment.

That Mad Men has built a show around this awareness–what another era might just call “wisdom”–is one reason it’s both one of the greatest TV series of its period and one of the least successfully imitated.

In “Severance,” that dual consciousness of time is more prominent than ever. The first half of season seven ended with Don saving himself once again, engineering the sale of SC&P to McCann-Erickson. It was the kind of resolution you might expect to see in a series finale: America is on the Moon, the partners are now rich, Bert Cooper is soft-shoeing off to the afterlife and everyone else, like Peggy, has come a long way since we met them. Good job, everyone! Cue up the Beatles’ “The End” and let’s call it a wrap!

But the story is still going on for another half season, and “Severance” finds several characters facing the fact that they’ve gotten a decade older. We saw this in last year’s outstanding “The Strategy” as Peggy grappled with turning 30: every choice you make, every opportunity grasped, means other opportunities and choices you’ve passed up forever.

Some characters find they’ve gotten plenty but it’s left them unsatisfied. Others have to deal with what happens when life, like an inept waiter at a restaurant, brings you what someone else ordered. At one point in “Severance” Don finds himself talking to a colleague who’s suffered a loss but tells Don that he’s decided to take it instead as a sign. “Of what?” Don asks.

“The life not lived.”

That life–all the lives that could have been, the few remaining that might still be–hangs over a lot of characters in this premiere. After Bert Cooper’s death in last year’s mid-season finale, mortality is ever more present. Business goes on at the office–the sale to McCann, unsurprisingly, has not meant the end of problems–but there’s also a sense among the principals of taking stock, looking back at the lives they didn’t lead while they were at their desks, relationships they didn’t establish, risks they didn’t take. More than once, there are references to characters missing airplane flights, metaphorical and literal. Some possibilities have flown, and our SC&P friends can no longer assume they can simply catch the next one.

But even as time flies like a TWA jet, the episode also has a haunting sense of time’s fluidity. Don, in particular, seems to be in a kind of waking dream state, seeing faces and images that vaguely remind him of his past. (There are even a couple of different, contradictory cues as to the date in the premiere, which I would shrug off as meaningless in a show less careful.) Maybe it’s age; maybe it’s all the intimations of mortality in the show lately. Late in the premiere, Don has a conversation with a diner waitress (Elizabeth Reaser)–she reminds him of someone, but who? where?–about an unsettling dream he had. The more he thinks about it, the less he’s certain when he dreamed it–everything’s gone a little fuzzy. “When people die,” she tells him, “everything gets mixed up.” Don exists in the same present as the rest of the characters, but he’s not all there.

It’s a bit sci-fi, as if Don has become unstuck in time like Kurt Vonnegut’s Billy Pilgrim. (Early in the show’s run, Weiner described Mad Men as science fiction set in the past–meaning that it uses its setting, like sci-fi might use the future, to reflect on our own world. And what is the biggest subject of science fiction if not time?) It makes for a slow but haunting last beginning. The final overture is well-orchestrated by Weiner, who wrote Tony Soprano’s extended dream in The Sopranos‘ “The Test Dream” and has always explored the spectrum of consciousness: how dreams and hallucinations can be lucid and waking life can pass like a dream. 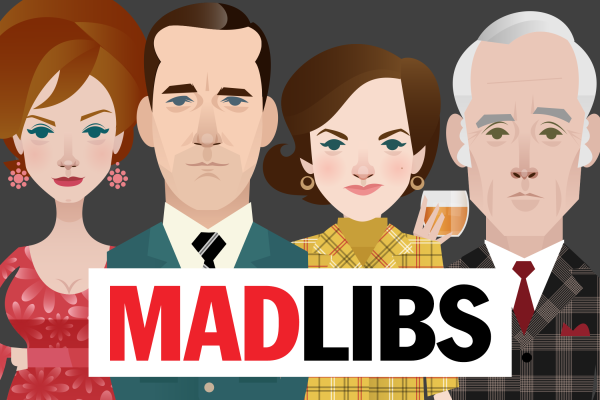 These Mad Libs Can Predict the Ending of Mad Men
Next Up: Editor's Pick