Mohammadu Buhari, the presidential candidate of the main opposition party All Progressives Congress, speaks to the press as he arrives for registration at Gidan Niyam Sakin Yara polling station in Daura district of Katsina, Nigeria, on March 28, 2015
Anadolu Agency—Getty Images
By Aryn Baker

In a radical reversal of fortune, presidential candidate Muhammadu Buhari has proved that the fourth run is the charm when it comes to being elected President of Nigeria. In an election plagued by technical mishaps, Buhari has sealed victory over incumbent Goodluck Jonathan by little more than 2 million votes in the tightest race the country has seen since the end of military rule in 1999.

Jonathan called Buhari to concede victory on Tuesday evening and if the transition goes smoothly — not a given considering Nigeria’s dark legacy of postelection violence — the onetime military dictator, 72, will be making history as the first opposition candidate to unseat an incumbent since the country gained independence from Britain in 1960.

These hard-won successes will be nothing compared with what is in store for the President-elect, however, from the falling price of oil, economic stagnation, entrenched corruption, a radical Islamist insurgency in the north and the possible resurrection of a southern rebellion. But his biggest challenge yet may be one familiar to any presidential challenger who unexpectedly finds himself a victor in a brutal campaign for change: managing expectations.

“Nigeria is in a situation where we have to get it right, right away,” says banker Henry Farotade by phone from Lagos. “We can’t afford to waste time. We are hoping Buhari will do like Obama when he came in after Bush, and turn things around.”

The spokesman for Buhari’s All Progressives Congress party, Lai Mohammad, says that the President-to-be is more than ready for the charge. Speaking by phone from the Nigerian capital, Abuja, as the final vote tallies rolled in, Mohammad could barely contain his joy. With precision he listed the next steps, from an acceptance speech to how Buhari would deal with ethnic and religious rifts brought on by the grueling campaign. “We are ready. We are going to take Nigeria in a new direction, and we are going to start by healing old wounds. This is no time for a honeymoon, this is a time for nation building.”

Buhari’s success at the polls on Tuesday comes 30 years after he was knocked from his post as military head of state in a 1985 coup. A born-again democrat who has pursued the presidency in every election since 2003, Buhari campaigned on a platform of zero tolerance for corruption and a commitment to wiping out the Boko Haram insurgent group that has killed and kidnapped thousands in the past year.

But for all the international attention Boko Haram has garnered, the threat of a renewed insurgency in the oil-rich south may prove far more devastating for Nigeria’s economic stability, and a far greater challenge for a Muslim from the north who represents everything that the southern insurgents fought against throughout the 1990s and early 2000s, as they sought a greater share of the country’s oil wealth. A temporary truce agreement is up for renewal later this year, and it is not certain that the southern insurrectionists will be willing to work with Buhari.

“There has been a lot of muttering in the south that they will not tolerate a Buhari victory, that they would suspend oil supplies and would kick out northern-owned businesses,” says Ryan Cummings, chief Africa analyst for the Johannesburg-based Red24 risk consultancy. “So the core issue facing Buhari is that he could have an insurgency in the northeast, and in the south as well.” For Elizabeth Donnelly, assistant head of the Africa program at the London-based policy institute Chatham House, the first step for Buhari will have to be “a real charm offensive” in the south, to ensure that southerners know he will be protecting their interests as much as those of his traditional northern constituents.

Nigeria can expect in Buhari a radically different leader from Jonathan, says Donnelly. Given his military background, Buhari is likely to maintain the regional alliance against Boko Haram and keep up a strong military campaign. But he may have troubles on economic issues, where he has little demonstrable experience. “What it really comes down to is whether or not Buhari can devolve economic decisionmaking to the right people.”

For Farotade, the banker in Lagos, what matters most is that Nigerians have proved that they can actually kick a sitting President out of power. “It’s an ecstatic feeling. It means we are gradually coming of age as a real democracy. This is the accountability we have been waiting for.” Though he has high hopes for Buhari, he is confident that if Buhari fails, there will be repercussions. “If Buhari doesn’t deliver, all we have to do is wait till 2019, and we will vote him out.” 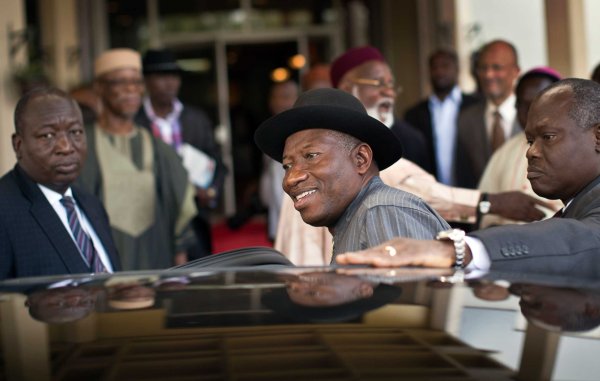