While governments from countries around the world this week have outlined how they plan to curb their carbon emissions, Costa Rica may seem like it’s showing off. The Central American country’s state utility company announced last week that it went the first 75 days of 2015 without using fossil fuels like coal or oil for electricity. The country expects to rely on renewable energy for more than 95% of the total electricity consumed this year.

It’s good news, but as is often the case with climate policy, the devil is in the details. A number of factors make the accomplishment less significant than it appears at first glance. Fossil fuels have been used to produce only a tiny fraction of Costa Rican electricity for decades—today, renewable energy accounts more than 85% of the total electricity produced—and popular support for climate change measures is strong. More importantly, trumpeting the elimination of fossil fuels for electricity elides the tougher reality that Costa Rica—like nearly every other country in the world—relies heavily on the use of fossil fuels for transportation.

“We don’t want this be a 75-day story, we want this to be a 365-day story,” said Monica Araya, executive director of Nivela, a Costa Rica-based climate change think tank. “We need to have a conversation about how to go beyond hydro, and not just about clean electricity, but clean energy.”

Read More: White House Outlines Plans to Cut Carbon Emissions by up to 28%

F0r Costa Rica, the road to eliminating fossil fuels in electricity has been decades long. Even before climate change became a global concern, Costa Rica has long been able to rely on clean energy sources for nearly all of its electricity, thanks to a tropical location well suited for carbon-free hydropower. In fact, the majority of Costa Rica’s electricity has been generated by hydropower in every year since 1989, according to data provided by Nivela.

Energy experts praised the use of renewable resources, but they also warned that hydropower may not be reliable in the future as climate patterns change. Today, other renewable energy sources in Costa Rica—particularly, geothermal and wind power—provide a significant proportion of energy, but hydropower still reigns supreme. Costa Rica needs to prepare for a climate that may not receive as much rain—which would dilute hydropower—by adding solar and wind power capacity.

Much more needs to be done, even beyond the utility sector. “It’s important to be precise—you’re only talking about electricity,” said Carolina Herrera Jáuregui, Latin America Advocate at the National Resources Defense Council. “The majority of the energy of used is through the transportation sector.”

Unlike many of its regional counterparts, nearly 75% of the Costa Rican economy is based on service businesses that rely much more on energy for transportation than for electricity. And transporting people and goods around Costa Rica—especially for the booming tourism industry—generally means traveling in a car or another personal vehicle, which emits more carbon than other means like trains, which are largely absent in the country.

Still, Costa Ricans show widespread support for efforts to curb climate change. Around 80% of the population has heard about climate change and essentially all of those who have heard of climate change believe in it, according to a United Nations report. A wide majority also supports new renewable energy projects, including 87% who support wind power plants and 77% who support geothermal plants. Less than a quarter support the further use of oil.

Popular understanding of climate change may not be surprising in a country known for designating more than a quarter of its area as national park land and for eliminating its army and subsequently investing heavily in education. “These things put us on a pathway that was friendlier to people and eventually friendlier to our natural capital,” said Araya.

In the decades-long battle against climate change, the significance of Costa Rica’s achievement will likely rest in the example they set for other countries as this December’s climate change conference in Paris approaches rapidly. “The movement that you see in Latin America is a very positive thing,” said Araya. “It’s easier in the U.S. and elsewhere to move if you see others moving.” 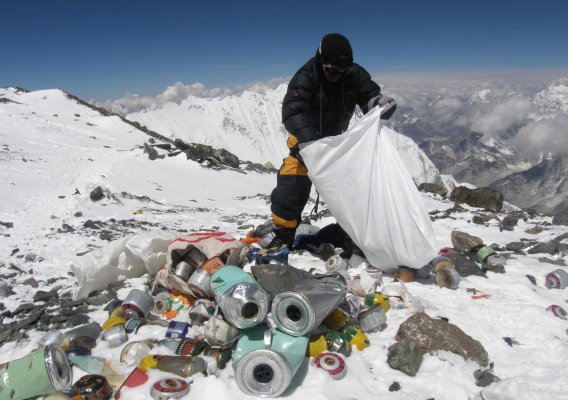 Indian Army to Clean Up Trash on Mount Everest
Next Up: Editor's Pick