He didn’t want to talk much about the former. “Look, I’ve sort of said whatever I’m not going to say about the email thing,” he said, after addressing voters here. But when Warren’s name came up, he positively lit up.

“I believe that Senator Warren is speaking with great clarity especially on the need to regulate Wall Street to hold the CEOs of banks accountable, and to make sure that we put people at the [Security and Exchange Commission] and other entities that are going to deter the sort of behavior that led to the crash of our economy,” he said. “If the banks are too big to fail without wrecking our economy, then they’re too damn big.”

“I would welcome her supporters…if I were to get into the race,” added the former Maryland governor and likely presidential candidate.

Those populist themes, which have made Warren a leader in the Democratic party, found a central place in O’Malley’s prepared remarks during a scrambled egg breakfast in the suburbs of Manchester, before a crowd about 150 business insiders, political elites, and students. Lamenting what he described as the Republican economic agenda—“concentrate wealth at the top, keep wages low, and systematically deregulate Wall Street”—O’Malley advocated instead for increasing the minimum wage, making it easier for unions to collectively bargain “so that wages go up,” and to “expand social security, not dismantle it.”

“The central question of the battle for our democracy is, how do we make our economy work for all of us?” O’Malley said as the crowd ate scrambled eggs and fruit bowls in a hotel conference space.

“And yes, just as Teddy Roosevelt said, we have to be ready to stand up to special interests whenever their narrow agendas… threaten to wreck the homes and livelihoods and the hopes of average Americans,” he added.

O’Malley faces a major uphill battle for the Democratic nomination. While Clinton garners nearly 56% of the likely Democratic vote in New Hampshire, the first primary state, O’Malley is currently earning only about .8%, according to an average of five polls between January and March this year. In his press conference, he repeated a phrase he has leaned on often when asked about Clinton. He said history was full “candidates who are ‘inevitable’ until the moment they are not” and said that Americans were ready for “new leadership.” But he dismissed opportunities to needle the former Secretary of State directly.

Among New Hampshire voters, O’Malley clocks in behind every other potential Democratic candidate, including Warren (17.8%), who has said repeatedly that she is not running, and Vice President Joe Biden (7.8%). Vermont Sen. Bernie Sanders, who is also considering a run for the nomination, earns 9.4% of the primary vote in New Hampshire, according to those same polls.

The emotional high of the half-hour talk came when O’Malley asked the crowd of mostly white, middle-aged and older voters for a “little bit of audience participation.”

“How many people here believe firmly that you have enjoyed a better quality of life than your parents and grandparents?” O’Malley asked. Nearly everyone in the small room raised their hand.

“Second question,” he said. “How many of you believe just as firmly that your children and grandchildren will enjoy a better quality of life than you?” About two people raised their hands. The room was silent for a beat.

“That is the great question at the center of the debate at the kitchen table of our great democracy,” O’Malley said.

Afterward, about half the crowd gave him a standing ovation. 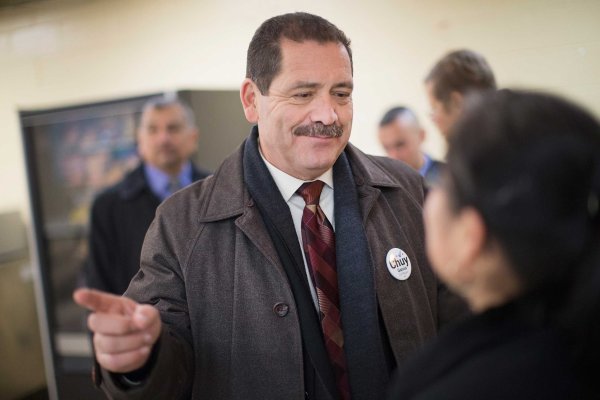