U.S. President Barack Obama and First Lady Michelle Obama walk down the steps of Air Force One at Andrews Air Force Base in Maryland on March 30, 2015
Susan Walsh—AP
By Maya Rhodan

During her senior year at Princeton University, First Lady Michelle Obama couldn’t imagine she would live to see the election of the nation’s first African American, let alone be married to him. “To say that during her Princeton years she could not envision an African American president is like saying that the sun rises and sets every day,” writes Northwestern University Professor Peter Slevin in his upcoming biography, Michelle Obama: A Life.

At the time, the future First Lady was a girl from the South Side of Chicago, navigating the Ivy League world and its social intricacies while questioning the impact black Princeton graduates had on the community at large. She didn’t want to forget her roots and the importance of reaching back — a value instilled in her by her parents back home. Little did she know decades later, as her husband Barack Obama carries out the final years of his second term as President, some of her most notable achievements would involve doing just that.

There isn’t much news in Slevin’s 300-plus page biography of the first black First Lady, which is largely interesting for the mere fact that there’s an insatiable appetite for inside information on its main subject. The key biographical notes are all there: the stint at Princeton and Harvard Law School, her first job at Sidley Austin and her eventual foray into community engagement through her work at the organization Public Allies and the University of Chicago Hospital. Yet Slevin is able to connect the dots of Mrs. Obama’s life and assess the impact her upbringing, deeply rooted in the black experience, has had on not only her impressive career trajectory, but also the legacy she’ll leave behind as First Lady.

Much of the book is an exploration of the racial and cultural history of Chicago, a city with a rich history of segregation and strife, that’s also home to a neighborhood where the Obamas’ home is located that White House adviser Valerie Jarrett describes as “the real world as it should be.” And the anecdotes about the First Lady’s life draw the importance her race has played in her life trajectory.

Michelle and her brother Craig lived in a tiny apartment on the second floor of a bungalow on South Euclid Avenue, where their resourceful parents emphasized the importance of getting an education while filling the gaps on black history left open by their Chicago public-school education. She would later ride public transportation to the sprawling magnet high school she attended, named after civil rights icon Whitney Young, where counselors would tell her she wasn’t a good fit for her dream school of Princeton. Her sights, they said, were too high. She’d later use that same rhetoric to urge folks to vote for her husband, a freshman Senator with his sights set on the White House. And eventually, the story would help her persuade audiences of young people, particularly black and brown students, to focus on getting a college education as a part of her Reach Higher Initiative at the White House.

Even in a short blurb about the Obamas’ budding romance, the author notes that Michelle’s mother Marian at one point worried that Barack’s biracial background would make navigating society’s prejudices difficult. In the end, though, she accepted the future President who she said “shared the values of [their] family.”

And despite the success the First Lady was able to achieve for herself, some of the most influential work she’s done happened on the campaign trail. Though reluctant to agree to a headfirst dive into national politics following the then state senator’s unsuccessful bid for the seat of Illinois Representative Bobby Rush, the First Lady is depicted as a ride-or-die politician’s wife, who was ready and willing to do whatever it took to secure her husband’s position in the American history books.

“If Barack was a helium balloon,” Slevin writes, “Michelle was the one holding the string.”

Slevin’s biography of the First Lady will be released April 7. 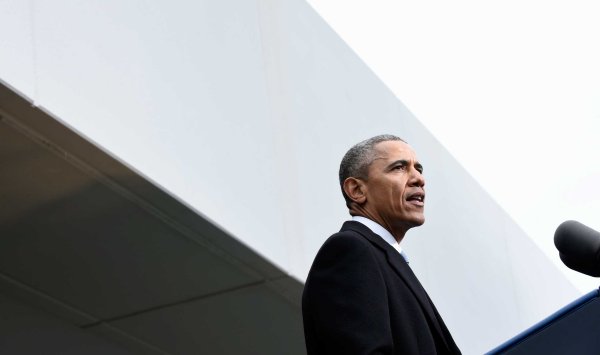 Obama Pays Tribute to Teddy Kennedy as Institute Opens
Next Up: Editor's Pick