Spring wasn’t supposed to start this way for Mike Pence.

The Indiana Republican governor had planned to spend April finalizing the state budget and pushing a new education initiative, all while quietly staying above the fray of the 2016 presidential race while he watched the field take shape — and waited to see if an opportunity materialized. Instead, he has suddenly found himself under fire from gay-rights groups, business leaders and even the owner of the Indianapolis Colts. All because of backlash from a newly enacted law that he doesn’t seem to have seen coming.

The fallout continued Monday when Indiana business executives, including major health care providers and Internet companies, sent a letter to Pence urging him to clarify the law and expressing concern “about the impact it is having on our employees and on the reputation of our state.” The head of the NCAA, which has its headquarters in Indianapolis and is set to host college basketball’s Final Four there in April, raised the prospect of not holding championship events there in the future. And the band Wilco said it would cancel a May 7 show because the law “feels like thinly disguised legal discrimination.” Pence, bowing to days of criticism, urged lawmakers Tuesday to send him legislative language making clear that the law doesn’t allow discrimination.

The law, officially called the Religious Freedom Restoration Act and signed Thursday by Pence, prohibits any measure that would “substantially burden” a person’s ability to follow his or her religious beliefs. Supporters defend it as a protection of religious freedom at a moment when voters and courts have increasingly legalized same-sex marriage across the country — including in Indiana last year. Opponents decry it as an invitation for businesses to deny services to gay customers. And caught in the middle is Pence, who angrily defended the law and dismissed media coverage of it as “shameful” in a nationally televised interview on Sunday.

“There’s been shameless rhetoric about my state, and about this law, and about its intention all over the Internet,” he said on ABC’s This Week. “This is not about discrimination. This is about empowering people to confront government overreach.”

Pence, whose office didn’t respond to a request for comment Monday, is correct in noting that almost 20 other states have adapted similar measures and that the Indiana bill is similar to a federal law enacted by former President Bill Clinton. Illinois also passed a similar law with the support of then state senator Barack Obama.

“The issue here is still: Is tolerance a two-way street or not?” Pence said Sunday, echoing other conservatives in arguing that tolerance for religiously based opposition to same-sex marriage should be supported just like tolerance for gay marriage itself.

But there’s little question that the controversy has put Pence on the defensive at a time when his potential 2016 rivals are moving full speed ahead in the campaign.

A relative unknown on the national stage, the former Congressman has steadily built his conservative credentials both as a lawmaker and the state’s chief executive. He gave a keynote address at the Conservative Political Action Conference last month, and is touted as a full-spectrum conservative who can unite fiscal conservatives, social conservatives and business-friendly establishment Republicans. While he hasn’t made the same moves toward a presidential campaign that some other Republicans have, his widely-known support from the billionaire industrialist Koch brothers could make him a potent candidate if he runs.

Now, though, he’s been forced to defend a legal framework that opponents dismiss as a relic of the past, even if it was one once supported by Clinton.

“If you’re perceived rightly or wrongly to be antigay, there’s not much political upside for that,” said Steve Schmidt, a Republican strategist who ran John McCain’s 2008 campaign. “Laws like this unnecessarily put the two [GOP] wings in tension with each other.”

Sticking to his position might be the most surefire way to maintain conservative support at this point. After all, Wisconsin Governor Scott Walker, who became a GOP front-runner after high-profile confrontations with organized labor, has demonstrated the potency of using a polarizing issue to gain conservative acclaim nationally.

“Governor Pence right now has the opportunity to win the Republican nomination by standing firm,” said Mike Farris, a conservative constitutional lawyer who in 1993 helped draft the federal bill singed by Clinton. “But if he weasels out of this in order to please the clamor from the mainstream media, he will lose any chance whatsoever of winning.”

“What is the problem they’re trying to solve?” McCrory said, according to the Charlotte Observer. “I haven’t seen it at this point in time.”

It may not end up mattering much for Pence’s long-term political hopes if he ultimately doesn’t run this time. And a Republican fundraiser close to Pence pegged the chances of him doing so at less than 10%. Still, in one of his first major forays onto the national stage, even Republicans acknowledge that Pence let opponents outmaneuver him in defining the policy.

“This is a case where the opposition groups defined this bill around discrimination before Mike Pence and supporters of it could definite around religious liberty,” said Republican strategist Kevin Madden, who advised Mitt Romney’s presidential campaigns. “And it’s created a political headache for Mike Pence as a result of that.”

MORE: What You Need to Know About Indiana’s New Law

For your security, we've sent a confirmation email to the address you entered. Click the link to confirm your subscription and begin receiving our newsletters. If you don't get the confirmation within 10 minutes, please check your spam folder.
Most Popular on TIME
1
Dems Cite Monty Python in Legal Filing to Mock Trump Challenge
2
'First Thanksgiving' Tribe Faces COVID-19 Epidemic
3
Fox News Ratings Plummet After Election 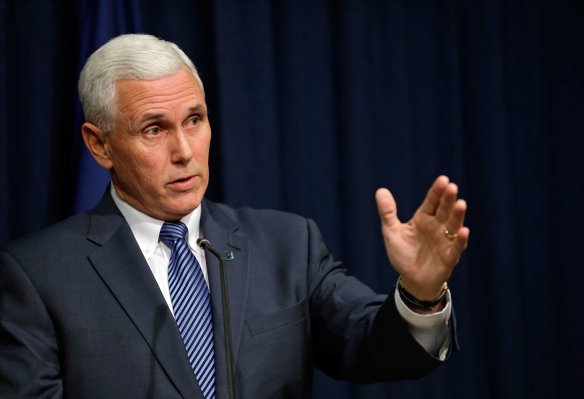 5 Things to Know About the Governor Behind Indiana's Controversial New Law
Next Up: Editor's Pick