Last February, a radiation accident occurred at the Department of Energy’s Waste Isolation Pilot Plant near Carlsbad, New Mexico. A drum containing radioisotopes like plutonium was improperly packaged at the Los Alamos National Laboratory near Santa Fe and ruptured, causing a leak.

The incident exposed 22 workers to radiation levels “not expected to threaten their health,” according to the contractor that operates the plant. In September, Energy Department officials estimated the cost of the initial recovery of the dump at $240,000,000 and said it might be two or more years before it’s fully operational again.

Investigators have now found the cause of the entire issue: The barrel was packaged with “chemically incompatible” contents – in particular, a brand of cat litter (used to absorb liquids) that caused a chemical reaction and created gases that resulted in the canister’s lid becoming dislodged.

A team of federal inspectors released a report last year that identified chronic lapses in safety procedures at Los Alamos, saying “waste processing and safety-related control procedures should have prevented the addition of these potentially incompatible materials,” which again, we’d like to stress, means cat litter.

The scariest thing about this story is that they never told us what the right brand of kitty litter to use for radioactive waste packaging.

How will we know?

This story originally appeared in People.com 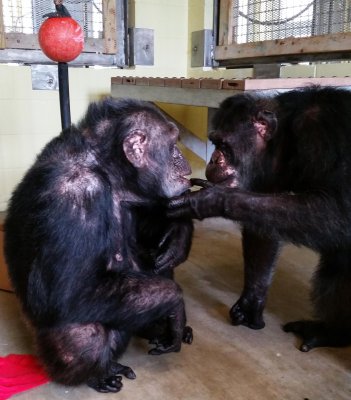 Iris the Chimpanzee Finds Love at Florida Sanctuary
Next Up: Editor's Pick