Indiana Gov. Mike Pence announces that the Centers for Medicaid and Medicare Services has approved the state's waiver request for the plan his administration calls HIP 2.0, during a speech in Indianapolis.
Michael Conroy—AP
By Zeke J Miller

Indiana’s new religious-freedom law, which has prompted calls for a state boycott because it might permit discrimination against gays and lesbians, was made law by a Republican governor and Republican legislature. But the controversy could also ensnare leading Democrats like President Barack Obama, Former Secretary of State Hillary Clinton and New York Senator Chuck Schumer, who previously supported bills with similar effects years ago.

“The Religious Freedom Restoration Act was signed into federal law by President Bill Clinton more than 20 years ago,” said Indiana Governor Mike Pence on ABC’s This Week, defending his state’s actions by pointing to similar federal legislation. “Indiana properly brought the same version that then state senator Barack Obama voted for in Illinois before our legislature.”

The Indiana law prohibits the state from enacting statutes that “substantially burden” a person’s ability to follow his or her religious beliefs. Critics argue it could be used to allow businesses to discriminate against gay and lesbian Americans in the state, prompting criticism from executives at companies like Apple, Salesforce.com and the NCAA, which will host the men’s Final Four basketball tournament in Indianapolis next weekend.

Democrats, including Hillary Clinton and aides to President Obama have also criticized the law. “Sad this new Indiana law can happen in America today. We shouldn’t discriminate against ppl bc of who they love,” Clinton tweeted over the weekend.

But the Indiana law was modeled on the federal Religious Freedom Restoration Act (RFRA) introduced by then Representative Chuck Schumer, who is now a senior Democratic Senator from New York, and signed into law in 1993 by then President Bill Clinton. The bill passed the U.S. Senate by a vote of 97 to 3 in 1993. “The power of God is such that even in the legislative process, miracles can happen,” President Clinton joked at the time of the bipartisan consensus.

Unlike the federal law, which is focused on restricting government action to protect religious freedom, the Indiana version has a broader scope, potentially giving new rights to claim religious beliefs for private parties, like wedding-cake vendors who do not want to serve gay couples.

As an Illinois state senator in 1998, Obama also voted in favor of a version of the new Indiana law. Years after that law passed, Illinois passed an explicit ban on discrimination based on sexual orientation, making clear that the law could not be used to deny service between private parties. That provision is not on the books in Indiana.

Despite weighing in on other controversial legislation in states, including this month’s passage of an anti-union bill in Wisconsin, Obama has not commented on the Indiana law, leaving his aides to critique it.

“Look, if you have to go back two decades to try to justify something you are doing today, it may raise some questions about the wisdom of what you’re doing,” White House press secretary Josh Earnest said Sunday on ABC’s This Week. Obama ducked a question on the Indiana law Saturday from reporters before departing on a two-day golf vacation to Florida.

The 1993 federal RFRA formed the underpinning of last year’s Hobby Lobby decision at the Supreme Court, which allowed some employers claiming religious objections to avoid providing contraceptive coverage to their employees as required by the Affordable Care Act.

In a contentious interview with NPR’s Terry Gross last year, Hillary Clinton repeatedly called same-sex marriage a state issue when explaining her decision to reverse her opposition to such unions after leaving the State Department. She has yet to weigh in on whether she believes same-sex marriage should be protected at the federal level, even as the Supreme Court is set to hear cases that would do just that in the coming months.

Asked by Gross if her views on gay rights had changed since the 1990s, Clinton said, “I think I’m an American, I think that we have all evolved, and it’s been one of the fastest, most sweeping transformations that I’m aware of.”

David Axelrod, a former top political aide to Obama, wrote in his book published last month that Obama believed in same-sex marriage before he ran for the White House, but hid that position for political reasons. 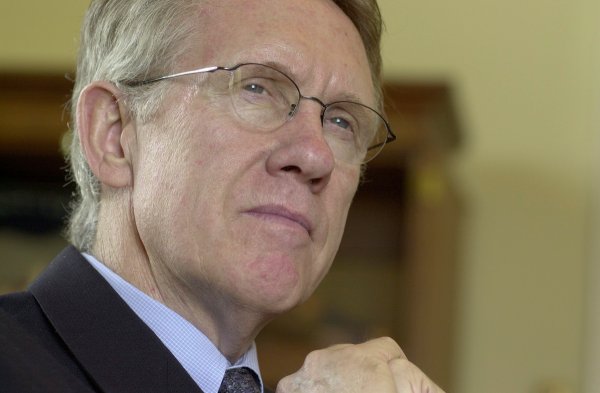 3 Surprising Facts About Senator Harry Reid
Next Up: Editor's Pick