5 Networking Mistakes That Keep You From Getting Ahead

Every single roundup of career advice out there talks about the importance of networking. Less talked-about but just as important is doing it correctly. You might think you’re doing all the right things by hanging out near the boss at the sales retreat or passing out your business card to everybody you meet at the trade show reception — but in reality, bad networking technique can do as much damage to your career as not networking at all.

Here are some common pitfalls experts warn against falling into.

Relying on online social networks. Yes, LinkedIn and its ilk can be a great way to further your network, but the point of networking is to actually, you know, meet people. James Jeffries, director of career development at Bard College at Simon’s Rock, says this is a mistake young workers especially need to be conscious of, since they grew up having simultaneous online and real-life relationships. “As networking becomes synonymous with online networking… they can neglect the importance of actually meeting up with people for coffee, making a phone call, or showing up at an event. So far online connections have not supplanted these traditional interactions,” he says.

Staying in your comfort zone. Mingling with others at corporate, industry or alumni functions isn’t going to be nearly as effective if you just hang out with people you know. Yes, it’s a good idea to catch up with acquaintances, but unless you push yourself out of your comfort zone and meet new people, you’re limiting the effectiveness of your networking, says Amanda Augustine, job search expert at mobile career network TheLadders. “Casual networking events at local watering holes can quickly turn into mini-reunions with the friends you already see on a regular basis,” she says in a post on the company’s blog. Augustine says you should set a goal of talking to three new people at every event you attend. “They have the most potential to expand your network the furthest,” she says.

Doing the business-card “drive-by.” Some people take the other extreme when it comes to networking. They’re so determined to meet as many new people as possible that they have it down to a science: A quick introduction, handshake and then they’re pushing their business card into the person’s palm and moving on before the other person can catch their breath. “Networking is not a race to distribute as many business cards or get as many cards as possible,” career coach Yvonne Ruke Akpoveta advises on the blog of her consulting firm, OliveBlue. To be effective, networking needs to be about relationship building, not card collecting. It’s not and will never be just a numbers game.

Focusing on what’s in it for you. “Networking can be described as the process of interacting or engaging in communication with others for mutual assistance or support,” Akpoveta says. The mutual part is key here. If you’re always asking what somebody can do for you, it’s going to get old quick. Find out what the other person needs or is interested in, and make that happen. “We need to change our mindset from focusing on not just what we can get, but to also what we can give,” Akpoveta says. If you’re known as a person who can deliver, people are more likely to remember you — and more likely to reciprocate when you’re the one asking for a favor or a referral.

Not following up. This sounds like a no-brainer, but how many of us have been rifling through a desk drawer and stumbled across the business card of someone who would make a great contact — if only you’d emailed them back when you met them months ago. “Think of each networking event as a speed dating exercise,” Augustine says. “If you get someone’s phone number but never call them afterwards, the evening was a waste.” Shoot off a quick note following your meeting. It doesn’t have to be elaborate: Just say, “Hi, it was great meeting you. I wanted to make sure you had my contact info, too, because I’d like to stay in touch.” Even a brief email can get the ball rolling. 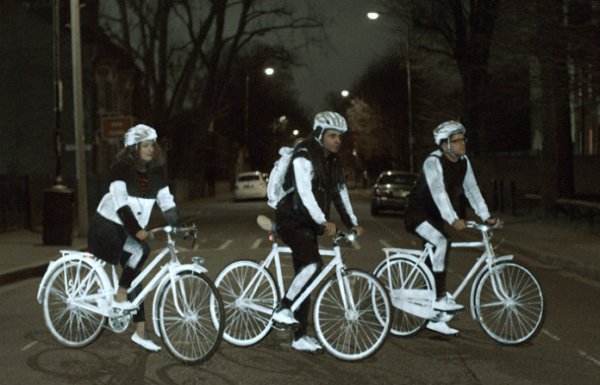 This Glow-in-the-Dark Spray Could Make Cycling at Night Way Safer
Next Up: Editor's Pick