Wisconsin’s Nigel Hayes in the most interesting character in the NCAA tournament. The sophomore forward is averaging 13.7 points per game thus far in the tournament, but it’s his off-court antics that have made him a star. Let’s take a look back at five things that make him the tournament’s most lovable player.

Here’s how Hayes opened his press conference after the Badgers’ win over Coastal Carolina:

Hayes tried to whisper to Frank Kaminsky that he thought the stenographer in Los Angeles was “beautiful,” but he didn’t realize his mic was on. He looked like he wanted to disappear, which is hard when you’re 6’8″.

He made sure to apologize to the stenographer in question

Hayes realized that his gaffe might have been as embarrassing for the stenographer as it was for him, so he apologized to her on Twitter.

She was totally cool with it, though.

He wants to sleep in Kobe Bryant’s locker

Hayes is sharing Kobe’s locker this week, and hopes to gain some of Bryant’s skills by osmosis.

“Here we are in Kobe’s locker,” Hayes told reporters, according to WKBT. “I will probably sleep in this locker tonight so that way I can absorb Kobe powers and ability tonight and hopefully it will help me play well.”

He’s been doing stuff like this his entire college career

During last year’s tournament, Hayes started interviewing teammates as “Nigel Burgundy.” The videos were a hit, so he kept the act going after the season was over. In May, he helped keep things light during finals week by interviewing students in the library.

How can you not root for the Badgers? 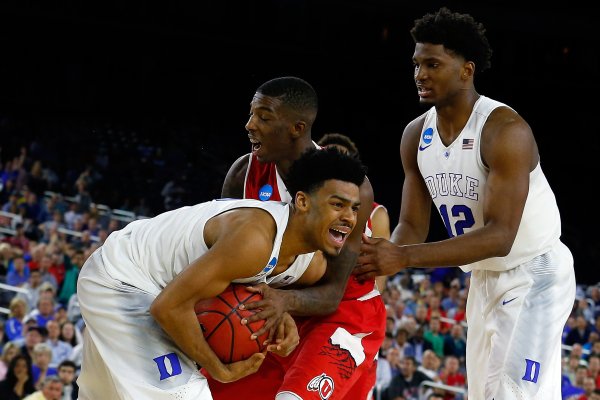 That Last-Second Free-Throw in the Duke-Utah Game Cost Vegas Millions
Next Up: Editor's Pick