Quinn Cook #2 of the Duke Blue Devils and Delon Wright #55 of the Utah Utes battle for a rebound during a South Regional Semifinal game of the 2015 NCAA Men's Basketball Tournament at NRG Stadium on March 27, 2015 in Houston, Texas.
Tom Pennington—2015 Getty Images
By Eliana Dockterman

When the buzzer sounded, Duke was up five points 62-57. That was bad news for bettors who picked Duke. Since most sportsbooks had Duke as a 5-point favorite, Duke would have to win by more than 5 points for those bettors to get paid. But after players had already left the court, officials said they had called a last-second foul. Putting 0.7 seconds back on the clock, Duke guard Quinn Cook sank one free-throw that cost casinos thousands because they were forced to pay the three-quarters of bettors who had placed their money on Duke.

Exactly how much money casinos lost is still unclear, but it’s probably in the millions. “It caused a million-dollar swing with parlay liability, to the bad,” MGM vice president of race and sports Jay Rood told ESPN.

Here’s what happened: Duke led 62-57 with 10 seconds left in the game when Cook rebounded a missed shot by Utah forward Jordan Loveridge. Cook wrestled for the ball with Utah defenders in what could have been a jump ball call. But the whistles stayed silent, and Cook dribbled out of trouble.

With the game seemingly over, the Utes began to head back to the locker room as the Blue Devils celebrated. But officials said they called a foul on Utah guard Brandon Taylor who grabbed Cook as he was dribbling away with 0.7 seconds left. Officials called the Utes back to the court so Cook could shoot what seemed to the players to be pointless free-throws. Duke came away with its 6-point victory.

According to ESPN, 77% of spread bettors were on Duke on Friday night. Las Vegas sportsbook operator CG Technology said they had a six-figure swing after the free-throw, according to ESPN.

Bettors tweeted their fury and joy—depending upon where they placed their bets:

Watch the last-second foul below: 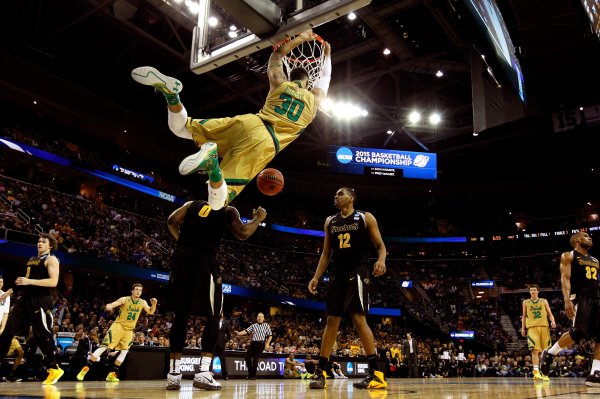