Any death is perhaps hardest on the survivors. But for those who knew someone on board Malaysia Airlines Flight 370, which disappeared while flying between Kuala Lumpur and Beijing on March 8, the grieving process may be more prolonged and painful.

The Malaysian Prime Minister announced Monday that, based on British satellite data, officials concluded that the plane went down in the Indian Ocean. At a press conference with relatives the following day, the airline’s chief executive officer Ahmad Jauhari Yahya said no passengers likely survived, “a reality we must face and we must accept.”

But in the absence of any hard evidence or tangible proof of a crash, such reality is an even harder pill to swallow. “It is very reasonable and even expected that many family members would struggle with accepting the reality of their loved ones being dead,” says Holly Prigerson, director of the center for end-of-life research at Weill Cornell Medical College. “There is no proof that their loved ones died; no remains recovered, and no evidence to confirm the death. I would expect that in circumstances like this that the denial is magnified.”

“I really just want my son to come home and to be safe. My heart is broken. My son is definitely going to be all right,” Liu Guiqui told China Central Television on March 23. Liu traveled to Kuala Lumpur from China because, she said, “I wanted to be the first to see my son and greet him when he returns.” Liu has not yet told her granddaughter about her father’s disappearance.

Denial can be a strong part of the initial bereavement process, even when there is certainty surrounding a tragedy and loved ones are able to bury the dead, says Prigerson. In fact, even after lengthy illnesses from natural causes such as cancer or Alzheimer’s disease, early responses to death can include shock and denial.

The uncertainty of what happened to the missing plane only complicates the grieving process. “Regardless of age or cause of death, it’s harder to grieve when there is no forewarning, when it’s sudden and when any element of violence is involved,” says Debra Umberson, a professor of sociology at University of Texas Austin. “All those factors are at play here, and are compounded by uncertainty.”

Such uncertainty leaves some relatives imagining that their loved ones are alive, but suffering. “These folks can’t grieve, because they don’t have any concrete evidence that their loved one has died yet,” says Umberson. And that can have consequences for how relatives cope with the tragedy. “When people get stuck and still question the very fact of the death, it would appear to impede this emotional processing of the loss,” says Prigerson.

Such prolonged grief, or chronic mourning, can have detrimental effects, and start to poison survivors both mentally and physically. Because they’re unable to accept the death, their grieving becomes less about missing the loved one and more about being unable to move on with their own lives. “To the extent that family members become singularly focused on learning what happened to their loved one and are unable to function in a more or less adaptive way – go to work, remain engaged as parents to their other children – this would signal a need for help with the grieving process,” says Prigerson.

Making matters worse is the emotional roller coaster that relatives have endured since the plane went missing. Conflicting reports, incorrect information, and red herring sightings of the plane’s debris only intensify the instinct to deny what officials tell them.

Working through the grief often involves finding meaning in the loss, which may be more challenging for these families. Those who lost children or in the Sandy Hook shootings found solace in advocating for gun control, and a mission with which to keep the memory of their loved one alive. For the families of passengers on the missing jet, that meaning may never come if the wreckage isn’t found, or if the reason for the plane’s disappearance isn’t determined.

Frustrated, and obviously struggling with understanding exactly what happened to their loved ones, relatives marched from their hotel to the Malaysian embassy on Tuesday, 17 days after the flight went missing, demanding answers and shouting criticisms of both the Chinese and Malaysian governments for failing to inform them of where their family members were. “It’s hard to find meaning in a loss like this,” says Umberson. 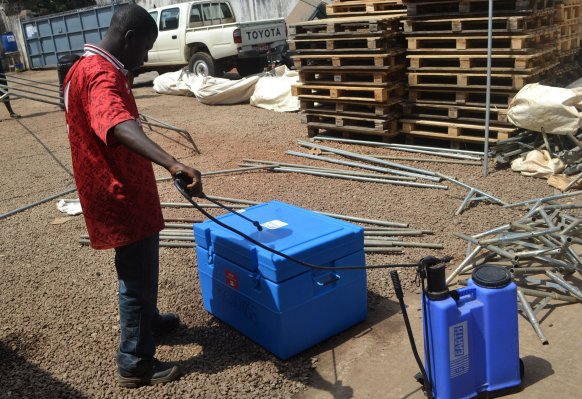 What You Need to Know About the Ebola Virus
Next Up: Editor's Pick