A Germanwings Airbus A320 is seen at the Berlin airport, March 29, 2014. An Airbus plane of the same model crashed in southern France en route from Barcelona to Duesseldorf, on March 24, 2015 police and aviation officials said.
Jan Seba—Reuters
By Laura Stampler

The morning after Germanwings Flight 9525 crashed into the French Alps—before any real details were known about the state of the plane or co-pilot Andreas Lubitz’ mental state—Britta Englisch hesitantly stepped onto a Germanwings flight from Hamburg to Cologne.

As soon as she walked onto the plane, she and the other passengers were personally welcomed by the pilot, who assured them that he’d get them to their destination safely. Englisch praised the dedicated pilot and crew on Germanwings’ Facebook page Wednesday night, and her heartfelt post has since gone viral—accumulating some 300,000 likes in less than two days.

“This flight was the morning after the crash—at this time no details were known and everything was mere speculation,” Englisch, who lives in Hamburg, tells TIME via email. “Logically it was pretty clear to me, that Germanwings might have been the safest airline at that morning—they doublechecked every plane and pilots and crew were free to choose if they were feeling able to fly or not. Nevertheless I had this feeling in my stomach. Feelings are not logical, are they?”

But her worry subsided after the pilot personally welcomed people as they boarded the plane. “If someone made an uneasy impression, he talked to them,” says Englisch, a PR manager at Stage Entertainment.

After boarding was complete, rather than going into the cockpit, the pilot took a microphone and began to address his passengers.

“He introduced himself and his crew, talked about how he felt—that some of the crew knew someone on the plane, that he also had a slight uneasy feeling not knowing what happened,” Englisch recollects. “[The pilot continued that] he and the crew are there voluntarily, that the company didn’t force anyone to be on duty that day, that he double-checked the plane this morning. [He said that] he has family, kids and a wife who he loves, that the crew has loved ones and [that] he’ll do everything to return safely to them every evening.”

For a moment everyone was silent.

“No one was checking his phone for the last time or reading the papers,” Englisch says, noting that that is unusual for a commuter flight full of businesspeople. “And then everyone applauded.”

Englisch didn’t intend for her post, supporting the grieving airline, to gain so much attention.

“It was just one post amongst thousand others and it was meant to say thank you to the pilot for not hiding in the cockpit but letting us be part of his feelings.”

Read next: Here’s What We Know About the Germanwings Co-Pilot Andreas Lubitz 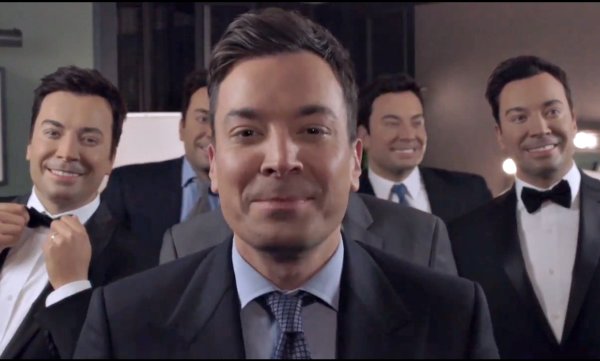 Jimmy Fallon Singing With Five Wax Dummies of Himself Is the Stuff of Nightmares
Next Up: Editor's Pick