Why the U.S. Is Fighting Beside Iran in Iraq and Against It in Yemen

An armed member of Houthi militia keeps watch as people gather beside vehicles which were allegedly destroyed by a Saudi air strike, in Sanaa, Yemen on March 26, 2015.
Yahya Arhab—EPA
By Karl Vick

Just to set the scene: In Iraq on Wednesday, U.S. warplanes began providing air cover to Iranian-backed militias in Tikrit, in a joint effort against the Islamic State of Iraq and Greater Syria (ISIS) coordinated through the Iraqi government. On the same day, 1,200 miles to the south in Yemen, the U.S. was providing guidance to Saudi pilots bombing Shia insurgents who are supported by Iran. So the U.S. was bombing Iran’s enemies in one country, and helping to bomb Iran’s allies in another.

Meanwhile, in Switzerland, American and Iranian diplomats were resuming their intense talks about how to contain Tehran’s nuclear program. Both sides insisted the negotiations were confined to matters atomic, nothing else. And that’s a good thing, because the ever-complex Middle East has never looked more so than it does at this moment.

And yet, in an important way, Wednesday’s events are wonderfully clarifying. March 26, 2015 may go down in history as the day that Arab states came out into the open to fight, putting their names and ordnance into a conflict that had been carried out by shadowy armed groups the governments quietly equipped, sheltered and cosseted, previously preserving a deniability that only muddied the situation even further.

Saudi Arabia declared it sent 100 warplanes to strike targets inside Yemen, and now has 150,000 troops standing by at the border. The intervention was backed by nine other nations, and the announced “logistical and intelligence” support of Washington, where the Saudis chose to convene the news conference revealing the campaign. The governments lined up behind the Saudis were all fellow Sunni governments—Egypt, Jordan, Sudan, Morocco, Pakistan, United Arab Emirates, Qatar, and Kuwait, several providing planes of their own. Egypt, according to a fresh report, is also preparing to send troops. The only holdout from the Gulf was Oman, which prides itself on maintaining the trust of Iran: the sultan of Oman played the role of mediator when U.S. and Iranian diplomats secretly met there to talk about formally launching the nuclear negotiation.

So the divide is clearly Sunni v. Shia, the same tension that created ISIS and has torn asunder Iraq and Syria. Iran’s foreign minister kindly pointed this out in an interview with Iran’s state-run satellite channel Al-Alam: “We have always warned countries from the region and the West to be careful and not enter shortsighted games and not go in the same direction as al-Qaeda and Daesh,” said Mohammad Javad Zarif, referring to ISIS by its Arabic initials.

The warning was a bit disingenuous, given Iran’s role as overlord of the Shia side of the divide. Tehran has been an essential ally of the Shi’ite-inflected Syrian regime led by President Bashar Assad, and a major player in Iraq, where on Thursday, three of the Shi’ite militias it backs announced they were dropping out of the fight for Tikrit, to protest the new American role in the battle.

In Yemen, Tehran is the primary sponsor of the Houthi tribe, providing training, arms and money. The Houthis were once largely confined to the country’s north, seat of its Zaidi brand of Shi’ism, but in September they took over the capital city of Sana. After linking up with Ali Abdullah Saleh, the longtime Yemeni president who was deposed during the Arab Spring, the Houthis marched on the southern port of Aden, where the elected president, Abed Raggo Mansour Hadi had been holed up before fleeing Yemen by boat ahead of Wednesday’s airstrikes. He was later seen meeting with the Saudi defense minister.

In peace, Yemen is an amazing country to visit. It doesn’t look like anywhere else on Earth, except maybe the illustrations in a storybook. It’s also an ideal example of what happens when a state collapses—or really, never coalesces in the first place. And that lesson really explains what the United States is doing in both Yemen and Iraq.

States were designed to bring coherence to human affairs, first and foremost by monopolizing the use of violence. In Iraq the government of Saddam Hussein used to manage that coherence—albeit brutally. And then the U.S. invasion of 2003 dismantled Iraq’s military, and distributed political power on sectarian lines. Now, in the battle against ISIS, which rushed into the void left by a state that has continued to fail, the U.S. finds itself joining Iran in an effort to re-establish the power of the weak central government in Baghdad. That government is dominated by Iraq’s Shi’ite majority—as well as by Tehran, which does not want chaos on the long border the two countries share.

Yemen, on the other hand, has never really managed to function as a state. It was two countries—plain old Yemen in the north, and the People’s Democratic Republic of Yemen in the south—as recently as 1990, when the collapse of the Soviet Union brought the cleavage to an end. Tribal authority has often trumped the state’s. And the country’s long border is with Saudi Arabia, that seat of Sunni power, and great regional rival of Tehran. Yemen, known as Arabia Felix, or “Happy Arabia” was so close to the Saudi kingdom that the border was not even demarcated until June 2000, in an agreement signed by Saleh.

So the Iranians are not terribly bothered by turmoil in Yemen, especially if the turmoil ends—as it looked like it might—with the Houthis more or less in charge, by dint of their new alliance with Saleh, and the large sections of the Yemeni military that remain loyal to him. But the end is not yet in sight, and in the meantime, al-Qaeda has maintained its most lethal branch in Yemen, and ISIS has been making its mark, claiming responsibility for the March 20 bombings of Shi’ite mosques that killed more than 130 people. The ensuing chaos forced 100 U.S. advisers off the air base from which they operated the drones that searched for al-Qaeda targets.

Those U.S. advisers are likely to return in some form behind elements of the 150,000 Saudi troops on the Yemen border awaiting orders from Defense Minister Mohammad bin Salman, photographed in his war room surrounded by generals in chocolate chip desert fatigues. The uniforms, pattrened after American combat fatigues, say a lot: First, about where the U.S. is in this fight. “We are establishing a Joint Planning Cell with Saudi Arabia to coordinate U.S. military and intelligence support,” the White House said in a statement. The other use of uniforms? Making clear, for a change, who’s actually fighting. 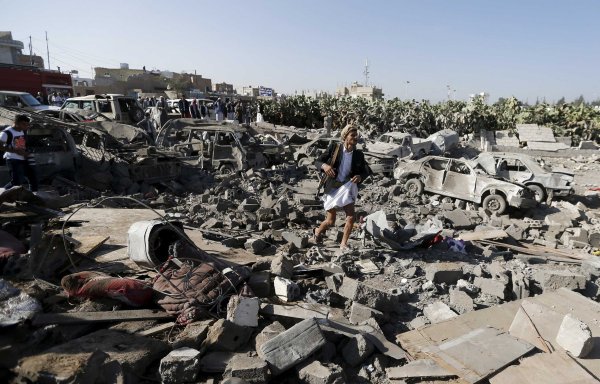