A Russian orthodox priest blesses the Soyuz Rocket, staff and members of the media two days before its launch. The Rocket will carry American Astronaut Scott Kelly and Russian Cosmonauts Mikhail Kornienko and Gennady Padalka to the International Space Station.
Philip Scott Andrews for TIME
By Jeffrey Kluger

God didn’t have much role in rocketry during the days of the old Soviet Union. The officially atheist state was a creature of economics, politics, industry, ideology. But religion? Not so much.

The barricades to faith fell along with the Berlin Wall and religion now thrives in Russia and the cities and nations of the old empire. That includes Baikonur, where cosmonauts Gennady Padalka and Mikhail Kornienko and astronaut Scott Kelly will take off in the early hours of March 28 for a long-duration stay aboard the International Space Station—and where less than 37 hours before launch, three Russian Orthodox priests arrived to perform a blessing of the Soyuz rocket that will carry the men.

It was sunny at the launch pad and, at 37° F (2.7° C), far more comfortable than the 18° F (-7.7° C) of the pre-dawn rollout of the Soyuz the day before. The priests arrived along with a large entourage of officials from Energiya, the company that built the rocket. The holy men chanted prayers for the rocket and the lead priest splashed the Energiya group with holy water. Then he did the same to the small crowd of gathered media. He took two questions from the Russian press, and within 20 minutes, the ceremony was over.

The priests looked small next to the 15-story tower of machinery they were blessing, and minds of different faiths—or of no faith at all—can differ about whether the ceremony offers any divine protection. But within sight of the Soyuz pad is the Soviets’ one-time lunar pad, where, on July 3, 1969, the massive N1 rocket that was supposed to take cosmonauts to the moon, erupted in the largest non-nuclear blast in history, spelling the end of Soviet lunar ambitions.

Terrible things can happen when people dare to fly to space. It’s in the nature of human beings to make such presumptuous journeys anyway. And it’s in our nature too to seek a little safety and comfort before we do.

Read next: A Year in Orbit Starts in Kazakhstan 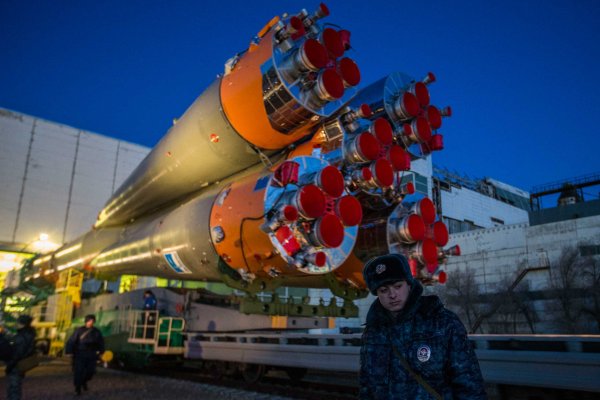 Rocket Bound for Space Station Rolls Out
Next Up: Editor's Pick