Heavy Rains Wreak Havoc in Northern Chile, One of the Driest Places on Earth

Heavy rains in the Andes sent flash floods through Chile’s Atacama desert Tuesday evening, leaving thousands without power or running water. The area is normally one of the driest in the world.

Overwhelmed by runoff, the river that runs through Copiapo, Atacama’s capital city, overflowed its banks with more rain predicted over the next 12 hours.

Authorities, fearful of mudslides, urged locals to seek safety elsewhere. Interior Minister Rodrigo Penailillo advised “anyone in an at-risk zone in the Atacama region” to evacuate, the BBC reports.

Northern coastal towns were hit especially hard. The government described the coastal town of Chañaral as in a “critical” state, while the Antofagasta and Coquimbo regions were affected seriously enough to warrant health alerts.

Military units were deployed in Copiapo to lend assistance, and President Michelle Bachelet rearranged her schedule in order to fly to the besieged city.

Along with causing widespread flooding, the rainstorms also washed out roads and disrupted communications. Local officials say 38,000 residents are without power and 48,000 are without potable water. 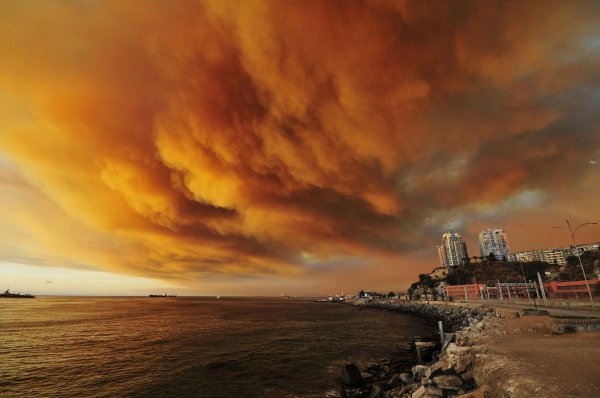