Just weeks before announcing his 2016 presidential bid, Kentucky Sen. Rand Paul is completing an about-face on a longstanding pledge to curb the growth in defense spending.

In an olive branch to defense hawks hell-bent on curtailing his White House ambitions, the libertarian Senator introduced a budget amendment late Wednesday calling for a nearly $190 billion infusion to the defense budget over the next two years—a roughly 16 percent increase.

Paul’s amendment brings him in line with his likely presidential primary rivals, including Florida Sen. Marco Rubio, who introduced a measure calling for nearly the same level of increases just days ago. The amendment was first noticed by TIME and later confirmed by Paul’s office.

The move completes a stunning reversal for Paul, who in May 2011, after just five months in office, released his own budget that would have eliminated four agencies—Commerce, Housing and Urban Development, Energy and Education—while slashing the Pentagon, a sacred cow for many Republicans. Under Paul’s original proposal, defense spending would have dropped from $553 billion in the 2011 fiscal year to $542 billion in 2016. War funding would have plummeted from $159 billion to zero. He called it the “draw-down and restructuring of the Department of Defense.”

The boost would be offset by a two-year combined $212 billion cut to funding for aid to foreign governments, climate change research and crippling reductions in to the budgets of the Environmental Protection Agency, and the departments of Housing and Urban Development, Commerce and Education.

Paul’s endorsement of increased defense spending represents a change in direction for the first-term lawmaker, who rose to prominence with his critiques of the size of the defense budget and foreign aid, drawing charges of advocating isolationism. Under pressure from fellow lawmakers and well-heeled donors, Paul in recent months has appeared to embrace the hawkish rhetoric that has defined the GOP in recent decades. At the Conservative Political Action Conference in February Paul warned of the rise of the Islamic State of Iraq and Greater Syria (ISIS). “Without question, we must now defend ourselves and American interests,” he said. Asked about federal spending, he added, “for me, the priority is always national defense.”

The amendment was filed on the same day as House Republicans overwhelmingly supported a plan to alter their budget to give billions more to the Pentagon.

It’s not the first time that Paul has adjusted his position on a foreign policy matter to find greater appeal within his own party. Early in his Senate career, Paul advocated for the elimination of all aid to foreign governments, including Israel, but after criticism has since backtracked on that proposal.

Paul’s change-of-heart on the budget highlights the importance of the funding document to many likely presidential candidates. In addition to the increased defense spending, Rubio provided a roadmap to his all-but-certain presidential campaign, introducing over 25 amendments stating his desire to deliver weapons to Ukraine, create education tax credits, strengthen pro-life legislation, weaken collective bargaining agreements and ensure Medicare wouldn’t be “raided” by Obamacare.

South Carolina Sen. Lindsey Graham, who is considering a presidential run, pointed to Rubio’s measure to increase defense spending as an example of how budget votes will impact the 2016 race. “That’s a great amendment,” says Graham, one of the Senate’s preeminent foreign policy hawks. “I think if you voted against Marco’s amendment you’d be probably on the outside of most people in the primary.”

Outside of Congress, other GOP presidential candidates have used the budget process to insulate themselves from tough political questions. New Jersey Gov. Chris Christie has relied on his outsider status to avoid commenting on everything from immigration to the gas tax. In New Hampshire earlier this month, former Florida Gov. Jeb Bush dodged a question on securing the border by pointing toward dysfunction in Washington.

“I think that Congress needs to pass a budget and put conservative priorities on the table,” he said at a house party. “And in that budget there are ways that you could show the opposition to the use of executive orders, and so I hope they do that, and I hope they fully fund the department of homeland security…because how else are we going to secure the border. This is the only way that we can do it.”

“I think we need to increase spending on defense and homeland security,” Bush added.

Read next: Why Rand Paul is Attacking Ted Cruz 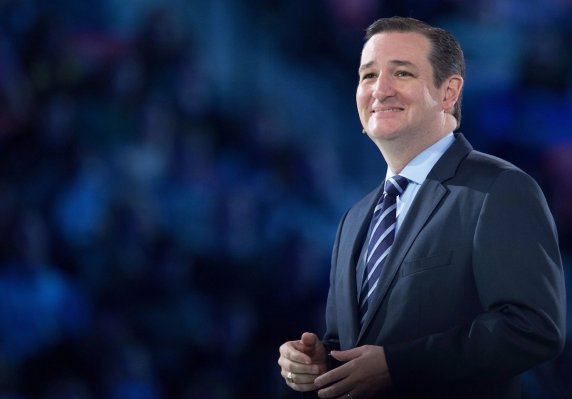 Why Rand Paul is Attacking Ted Cruz
Next Up: Editor's Pick