Congress to Solve Problem It Created 18 Years Ago

U.S. House Speaker John Boehner, a Republican from Ohio, speaks during his weekly news conference at the Capitol in Washington, D.C., U.S., on Thursday, June 19, 2014. Boehner said terrorism has spread "exponentially" during President Barack Obama's administration and that Obama needs an "overall strategy" to stem the rise of terrorism in the Middle East. Photographer: Pete Marovich/Bloomberg via Getty Images
Pete Marovich—Bloomberg/Getty Images
By Alex Rogers

Congress is on the verge of permanently solving a problem it created for itself 18 years ago.

The House expects to pass a major health care reform bill Thursday that would solve a recurring headache: a flawed formula for Medicare payments for doctors. For years, Congress has passed short-term patches—17 in all—temporarily fixing the problem just before doctors were slated to see their reimbursements drop suddenly.

Now, ahead of an April 1 deadline that would slice the Medicare payment rate by 21 percent, House leaders have struck a compromise that would permanently resolve the issue, roughly splitting the costs between beneficiaries and providers. The deal has garnered support from both progressive budget groups and anti-tax crusader Grover Norquist.

“It’s time we did this,” says House Appropriations Chairman Hal Rogers. “We’ve been crutching along on one cane for all these years and finally we’re facing up to the responsibility of getting it over with.”

Negotiated by Speaker John Boehner and Democratic Leader Nancy Pelosi, the House bill would make wealthy seniors pay up to 15% more in premiums beginning in 2018 and extend for two years funding for community health centers and the Children’s Health Insurance Program (CHIP), which faces its own spending deadline this fall. The bill would cost $141 billion over the next ten years, which will peel away support from some deficit hawks, even though it’s about a billion less than just kicking the can down the road.

“That’s pretty darn impressive,” says Senate Finance Chairman Orrin Hatch of the deal, which was easier to make than in years past as Medicare spending on physician services has dropped.

“It looks like to me it solves a problem that has been out there for about 18 years now, of a pay for that clearly was a phony pay-for,” adds Missouri Republican Sen. Roy Blunt. “It was a pay-for that was never going to work that Congress has never been willing to go to because it didn’t make sense.”

The question now is whether the Senate can pass the bill by Friday, when Congress plans to leave for a two-week recess. In the event that it can’t, the Senate will once again pass a short-term patch. “I just don’t know how you get it done before the end of this week in a way that’s befitting a review by the United States Senate and House,” says Maryland Democratic Sen. Ben Cardin. “It normally takes more than a few minutes to consider major legislation. … We’re not going to finish the budget until Friday morning.”

Democrats in the Senate have been more tepid in their support than their House colleagues, raising concerns over abortion provisions that have been countered in part after further negotiations. Several Democrats, including Sens. Chuck Schumer, Chris Murphy and Sherrod Brown, told TIME that they are concerned that the funding extension for CHIP is two, rather than four, years. But those concerns haven’t led them to state public opposition to the bill and it’s likely that there’s enough support among Senate Democrats to pass it. President Obama said Wednesday he’s got his pen “ready to sign a good, bipartisan bill.”

“We have a golden opportunity to accomplish something that people thought couldn’t be accomplished with this amount of toxicity, if you will, to the atmosphere,” says West Virginia Democratic Sen. Joe Manchin.

“Getting the ‘doc fix’ done once and for all is a positive development,” adds Maine Sen. Angus King, an independent who caucuses with the Democrats and is “inclined” to support it. “I wish that it had four years for the CHIP program, but as Mick Jagger once famously said, ‘you don’t always get what you want.'”

For the bill to come up in the upper chamber by Friday, every senator would have to agree to skip procedural hurdles to vote on the bill. After a drawn-out fight over the Keystone XL pipeline and the delay in what was once an easy, bipartisan anti-human trafficking bill, top Republicans are worried that Senate Minority Leader Harry Reid and the Democrats will slow down or kill the process. Reid has said that he will give his opinion of the deal once it passes the House.

“The incentives are there,” says Republican Sen. John Barrasso of Wyoming. “Now it just comes to whether Harry Reid is once again going to obstruct the workings of the United States Senate.”

In an ironic twist, just as Congress looks to relieve itself from a perennial headache, reports have emerged defending the so-called ‘doc fix’ for doing what it was supposed to do: keep Medicare spending in line. The Committee for a Responsible Federal Budget, an anti-deficit group, wrote last year that Congress paid for its delays 98 percent of the time with much of the savings coming from health care programs.

“It always gets derided because it’s annoying and it’s flawed,” Loren Adler, the group’s research director, told Bloomberg recently. “It doesn’t work as intended, it’s a little bit silly in some ways and it’s a lobbying bonanza. That being said, it’s accomplished what was intended—it’s controlled the cost of Medicare.” 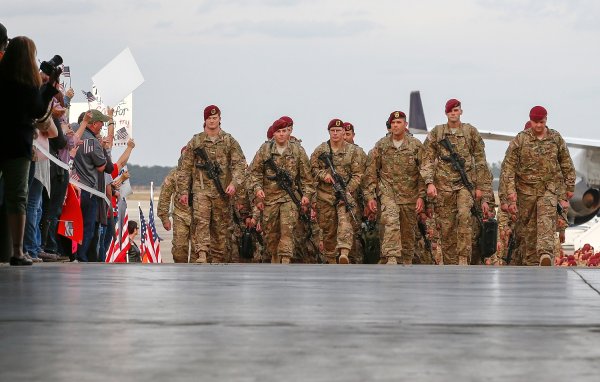 Congress Boosts War Spending as Wars Wind Down
Next Up: Editor's Pick