It’s hard to imagine the Mother of Dragons playing a bookish, submissive virgin. But apparently Emilia Clarke, who plays Daenerys Targaryen on Game of Thrones, was offered the role of Anastasia Steele in the S&M movie Fifty Shades of Grey.

Clarke told The Hollywood Reporter that she turned down the offer. “No regrets,” she said in the interview. “I’d done nudity before and was concerned with being labeled for doing it again.”

The wildly popular HBO show, of course, demands plenty of nudity from nearly all its actors. But now that she’s earning a rumored $7 million per season on the show, Clarke presumably has a little more control over how often she strips down. “There are other women who remove items of clothing on our show, so they’ve kind of got my nipple count down now,” she joked.

Instead of Fifty Shades, Clarke took a starring role as badass Sarah Connor in Terminator: Genisys with Arnold Schwarzenegger. The movie premieres July 1, but first Clarke will return as Khaleesi in Game of Thrones’ fifth season premiere on April 12. 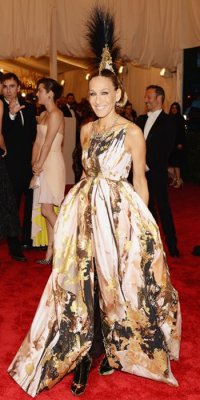 Sarah Jessica Parker's Most Memorable Looks
Next Up: Editor's Pick