Angelina Jolie pauses as she delivers a speech during a visit to a camp for displaced Iraqis in Khanke, a few kilometers from the Turkish border in Iraq's Dohuk province on Jan. 25, 2015.
Safin Hamed—AFP/Getty Images
Ideas
By Dina Borzekowski
Dina Borzekowski is a research professor of behavioral and community health at the University of Maryland.

Often, celebrity shenanigans make public-health advocates like me shake our heads and worry what kind of behavior they’re modeling for kids. In contrast, Angelina Jolie Pitt’s brave revelations Tuesday gave us cause to pause and applaud. Jolie has raised awareness of not only the genetic risks associated with breast and ovarian cancer, but also the challenges in medical decision-making.

Jolie’s account of having preventative surgery to remove her ovaries followed her announcement two years ago about her choice to have a double mastectomy. Jolie carries a rare but malevolent genetic mutation, the BRCA1 gene, which makes women more likely to be diagnosed with breast and ovarian cancer. Cancer took many of Jolie’s family members, including her mother, grandmother, and aunt. She is fortunate to have consistent and astute medical care — there is no doubt that Jolie can afford the treatment and support to undergo the surgeries, even with a demanding career and a large family.

Her announcements have not gone unnoticed. Many question not only Jolie’s surgical decisions, but also the choice to go public. Our team, including health communication and genetic-risk specialists from the University of Maryland and Johns Hopkins University, conducted a national study following the first account. The survey included more than 2,500 participants over a four-day period three weeks after Jolie’s announcement.

Across the U.S. and regardless of personal risk factors, about three-quarters of the American public were aware of Jolie’s medical story. Among women, about 83% had heard the story. Among all adults who had heard the story, about half could correctly describe Jolie’s asserted lifetime risk for developing breast cancer. The majority of surveyed men and women supported Ms. Jolie’s decision to reveal and undergo the surgery.

The more disappointing finding from the national study was the public’s poor knowledge of the BRCA mutation and risk of breast cancer. The rarity of this mutation was misunderstood by most, as was women’s risk of breast cancer. In fact, among those who followed the story, women were less accurate than men. About 94% of female respondents and 90% of male respondents overestimated the contribution of the BRCA mutation to breast cancer and the average woman’s lifetime risk of cancer.

According to the National Cancer Institute, about 12% of American women will develop breast cancer, and 1.3% will develop ovarian cancer. These estimates increase to about 60% and 39%, if one has the BRCA1 mutation. Such mutations are quite rare: In the United States, between 1 in 400 and 1 in 800 people have the mutation.

Jolie writes clearly and openly. While it was never her responsibility, she has communicated a straightforward story about difficult genetic medical decision-making. Journalists and health educators must take advantage of the current curiosity on this often misunderstood and sensitive topic. The next challenge is transforming public awareness into understanding. 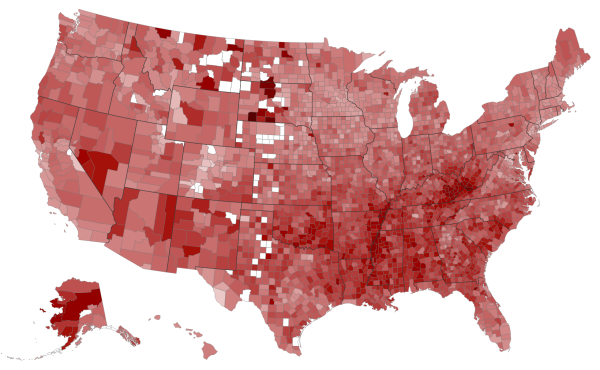 University Ranks Deadliest Counties in the U.S.
Next Up: Editor's Pick