Don't Tell Anyone, But I Kind of Liked Get Hard

The early reviews are in, and the verdict is nearly unanimous: Get Hard, the new comedy starring Will Ferrell and Kevin Hart, is a war crime of a movie. Edward Douglas, ComingSoon.net: “Finally, a comedy that homophobes, racists and generally stupid people can all enjoy together!” Alex Needham, the Guardian: “In years to come, media studies students will … be astonished that such a negative portrayal of homosexuality persisted in the mainstream in 2015.” Drew Taylor, the Playlist: “Absolutely horrible … a morally repugnant movie … a non-stop parade of racist, homophobic bile that would be bad enough from any comedian, but coming out of Ferrell and Hart has the effect of watching a childhood hero committing some horrible act.” Somebody call the cops.

Scanning these denunciations before seeing the movie, I was prepared for an ordeal. Ferrell and Hart are two stars with clearly, cleverly designed personalities but whose films are often lazy and coarse in execution. I’d been warned that this first screen pairing of the 6-ft. 3-in. Ferrell and the 5-ft. 4-in. Hart was all about the fear of prison rape. R-rated bromances often go heavy on a blithe homoeroticism; this movie would make the anticipation of gay sex both explicit and terrifying.

So during the first half-hour or so of Get Hard, I was primed for a high atrocity factor. Primed and disappointed. One note I scribbled read, “Still waiting to hate this.” An hour in, I realized to my shock that I was having a good time. Justin Chang of Variety would chalk this up to the “unexamined homophobia needed to fully enjoy Get Hard.” But laughter trumps political fairness, and Get Hard made me laugh at, and with, situations I hadn’t thought could tickle me. The movie has a warm heart beating under its seemingly scabrous shell.

In the script by Jay Martel and Ian Roberts (show runners of Comedy Central’s Key and Peele), Ferrell’s James is a successful, fabulously wealthy hedge-fund manager — a Wolf of Wall Street, L.A. branch — who has just made partner at the firm run by Martin (Craig T. Nelson). When not making millions each day at the office, he frolics in bed with his fiancée, and Martin’s daughter, Alissa (Alison Brie), who seeps out of her peignoir to give him great sex and spur him to finance her gaudiest whims; she’s James’ Lady Macbreast. Each morning James exercises nude — mandatory Ferrell butt shot — in full view of his gardening staff, to whom he pays no more attention than to the black guy, Darnell (Hart), who washes his car.

You’ll recognize James as that comedy stereotype, the empowered idiot, a cousin to Stephen Colbert’s TV persona. Ferrell has built his film career on playing guys who are cocooned in, and sustained by, an utterly unwarranted belief in themselves, most enjoyably in Blades of Glory. In that and the Anchorman movies, and here too, he’s not mean, exactly — just stupendously ignorant of certain social niceties and stupefyingly oblivious to the working-class people around him. James was born and bred in the 1% bubble. Like Mitt Romney, he’s learned what he needs to nosh on the upper crust, but no one’s taught him how to survive what for the bottom 47% is real life.

So when he is charged and convicted on 76 counts of fraud and embezzlement, for crimes he insists he did not commit, and ordered to do his time in maximum-security San Quentin, James plummets into panic. The very thought contorts his face into a Munchian scream. All he knows about prison, to which he will be sent in 30 days, is that it’s an unrelenting nightmare of enforced fellatio. As his lawyer (Greg Germann) predicts, “He’ll be chokin’ on a mouthful of balls.” To toughen him up for hard time, James needs a tutor and goes to the only black man he knows: Darnell.

James assumes that Darnell must be an ex-con, because he’s an African-American male. In fact, Darnell is an upwardly mobile family man tending to his wife Rita (Edwina Dickerson) and young daughter Makayla (Ariana Neal). But he’ll take a big payday by pretending to be a gangsta — he swipes his invented biography from the plot of Boyz n the Hood — and putting James through a regimen of hurt. Imagine that the J.K. Simmons teacher in Whiplash were really a pussycat, feigning sadistic intent to impress his naive pupil. The role is a twist for Hart: no longer the bantam battler of Ride Along and Think Like a Man, here he’s the ordinary underdog, the audience surrogate that skeptically appraises Ferrell’s character and eventually comes to accept it.

Director Etan Cohen (who helped write King of the Hill, Idiocracy and Tropic Thunder) pushes these clever conceits at a brisk pace while allowing his stars room to do their stuff: Ferrell’s on-the-nose-pathetic impersonation of Lil Wayne, Hart’s simultaneous playing of three cons — black, Hispanic and gay — whom James could expect to get up in his face. Tip (T.I. Harris) brings sexy, authentic menace to the role of Darnell’s gang-boss cousin. The movie flags only toward the end, when James has a comedically flat encounter with some neo-Nazis, then gets back on track by belatedly realizing its plot requires a whodunit resolution. By then you’ll recognize Get Hard as a modern gloss on the Dan Aykroyd–Eddie Murphy Trading Places: a little ruder and not quite as sharp, but in the ballpark of that 1983 comedy landmark.

And by “you,” I mean this reviewer. His last words, before he was hauled away by the critique police, were, “I kind of liked Get Hard.“ 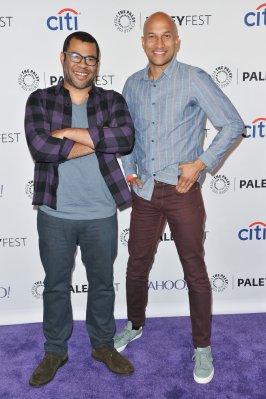 Key & Peele's Substitute Teacher Coming to the Big Screen
Next Up: Editor's Pick