Paratroopers with the 1st Brigade Combat Team, 82nd Airborne Division, march up the ramp as they return home from Afghanistan at Pope Army Airfield in Fort Bragg, NC on Nov. 5, 2014.
Chris Keane—Reuters
By Center for Public Integrity / Julia Harte and Alexander Cohen

The 2016 House and Senate budget proposals for war spending that moved toward a congressional floor vote this week were loaded up with tens of billions of dollars more than the Defense Department requested, representing the largest increase lawmakers have attempted to add to the executive branch’s requests for such funds.

These moves — which come as the Obama administration tries to wind down the U.S. war in Afghanistan and to steer clear of a large new incursion in Iraq — were pushed through by Republican lawmakers that since 2003 have received a total $8 million in contributions from the political action committees and employees of top defense contractors, according to an analysis by the Center for Public Integrity.

The proposals emerged from a convoluted congressional debate that pitted pro-defense hawks against federal deficit hawks, with the former — backed by defense industry lobbying — emerging triumphant.

The impetus for boosting war spending is that Congress enacted strict controls on regular Pentagon spending in 2011 and alleviated them only slightly last fiscal year, making a cut likely unless the Pentagon and the defense industry found new funds elsewhere. Supportive lawmakers as a result turned to the only military account not subject to spending caps, namely the Overseas Contingency Operations (OCO), a funding category created in 2001 for temporary expenditures associated with combat operations in Iraq and Afghanistan.

As the Center for Public Integrity reported in December, OCO over the years has become a slush fund for lawmakers and administration officials seeking to retain or expand military programs with no direct relationship to those wars.

But they’ve never sought to do it as blatantly or unashamedly as they did this month, when the Senate Budget Committee voted in a straight party-line vote to spend $96 billion in the OCO budget for 2016, and the House Budget Committee voted similarly to spend $94 billion. The amount appropriated for OCO in 2015 was $63 billion. While no precise listing of the additional programs to be funded under the Republican proposals has yet been released, lawmakers who favored the OCO increases did not assert that the extra funds were needed only for the wars.

Sens. Lindsey Graham (R-S.C.) and Kelly Ayotte (R-N.H.) were the principal sponsors of the successful Senate amendment to grow the OCO account. In urging a positive vote, Graham — who is exploring a presidential run — provided a long but imprecise list of security threats: “Everything that you have in common, radical Islam hates, and if somebody doesn’t do something about it soon, they will come our way again,” he told the committee, adding that increases to the OCO account were needed “to defend the nation.”

In total, the 67 current members of the House and Senate Budget and House Rules committees have received $15.6 million in adjusted dollars from the 2013 fiscal year top 75 defense contractors’ PACS and employees, from 2003 through the end of the 2014 election season.

On average, the top defense contractors gave Republicans $264,244 apiece while Democrats and Independents received $189,881. The lion’s share of contractor support went to the Senate Budget Committee’s 12 Republicans. The contractors’ PACs and employees contributed $5.7 million to their campaigns and leadership PACs, or an average of $472,219 per lawmaker.

Republicans on the House Rules committee received a total of $2.3 million, making them the second-highest average recipients of contractor largesse.

Graham received $760,244. The other sponsor of the amendment to increase the OCO fund, Ayotte, has less seniority than Graham but is one of the top average recipients of defense contractor contributions, calculated on a two-year basis, among the 67 committee members. First elected to the Senate in 2010, she’s raised $363,205 from the top contractors.

Two Senate Budget Democrats were also among the top 10 recipients of defense contractor contributions, though they voted against the Graham and Ayotte amendment. Hailing from a state that many defense companies call home, Sen. Mark Warner of Virginia received $1,053,271 in adjusted dollars. He was followed by Sen. Patty Murray of Washington, the fourth highest recipient overall, who received $823,536 in adjusted dollars.

Sen. Bernie Sanders (D-Vt.) disputed Graham’s claims during last week’s Senate Budget Committee hearing, saying the United States already spends more on defense than the next nine countries, and he rebuked his fellow senators for adding to the national deficit. “Republicans took us into protracted wars in Afghanistan and Iraq—and ran up our national debt by trillions because they chose not to pay for those wars,” he said in a prepared statement.

The Center calculated campaign contributions in 2014 dollars from the top 75 defense contractors, as ranked in fiscal 2013, using campaign data compiled by The Center for Responsive Politics as well as data from the Federal Election Commission.

This story is from The Center for Public Integrity, a nonprofit, nonpartisan investigative news organization in Washington, D.C. To follow their investigations into government spending and national security, follow them on Twitter. 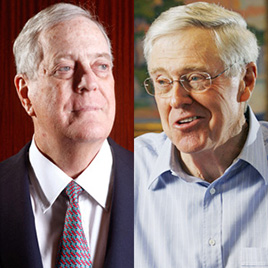 Koch Brothers Battle Against Export-Import Bank Heats Up Again
Next Up: Editor's Pick