The Red Cross: 'Ebola Started In Silence and Will End With Our Words'

By Elhadj As Sy and Yves Daccord

A year ago, the World Health Organization (WHO) confirmed the mysterious disease that had earlier swept through the tiny village of Meliandou, in Guinea’s southern forested region, had been identified as a “rapidly evolving outbreak” of Ebola, affecting several districts of the country and its capital, Conakry.

Suspected cases were also being investigated in border areas of neighboring Liberia and Sierra Leone.

Ebola had started to become an emergency.

Last month, our thoughts turned to another place in Guinea: the town of Forécariah at the other end of the country, in the west. Two Red Cross volunteers had been attacked there while attempting to provide “safe and dignified burials.”

Probably the single most-important factor in driving down cases over the past year has been a reduction in unsafe burial practices in which the still-contagious bodies of the deceased are handled by bereaved relatives. Unsafe practices still continue, however, in many places.

In Guinea, Red Cross personnel have faced an average of ten verbal or physical assaults a month; Liberia and Sierra Leone have also reported some form of “refusal to comply” with public-health measures.

Our words, our actions

In the Ebola hotspot of Kono, Sierra Leone, and according to local data, many communities still prefer traditional funerals to safer alternatives.

Most medical equipment we need to stop the outbreak is now in place, and yet new cases are still occurring, particularly in Guinea and Sierra Leone.

We need more than just medical hardware to get to zero cases. Now our words must pave the way to the last mile.

Words to break the stigma against healthcare workers and survivors, words to educate communities on prevention, words of solidarity from all over the world to say to affected people and communities: We won’t let you down, and together we can end Ebola.

We are trying to change behaviors and practices, and learning along the way that the transmission of knowledge is not enough.

Let’s use the power of words to repair misconceptions, promote dialogue, heal, reconcile and engage to overcome resistance, facilitate behavioural change, and ultimately get us to zero new cases.

Let’s do it fast: the rainy season will soon be upon us, and some areas could become very difficult to access. There is still work to do, and time is of the essence.

We will not just treat our way out of this disease.

In Liberia, most people – local data suggests as many as 70 percent – believe all that’s required to ward off Ebola is to refrain from eating bush meat, rather than avoiding contact with the bodily fluids of patients.

In one district surveyed by the Red Cross in Sierra Leone, 90 percent believed this, although nationwide there has been a significant increase in safe burials.

It’s easy to imagine how health-workers in full protective garb, looking like creatures from a nightmare, spraying homes with foul-smelling chlorine, might appear to isolated villagers.

There has also been miscommunication. The black body bags our volunteers and staff were using in some communities were rejected by bereaved people for whom tradition dictates that bodies should be wrapped in white, signifying respect – a vitally important word in the context of funeral rites.

We may not have listened quite as carefully to local people as we should have at the beginning. The black bags were replaced with white ones.

On the Ebola response overall, the road is forking. Down one path – characterized by sustained international solidarity and yet further heroism by local volunteers and health workers – lie zero cases, stronger health systems, and eventual recovery from the wounds Ebola has inflicted on human societies.

But if complacency or fatigue marks the other path, we may find ourselves dealing with a silent disaster that will threaten the gains already made as well as recovery.

We in the Red Cross Red Crescent warn that complacency is the enemy; but we believe we are not helpless in the face of Ebola. Our words and our actions will make a difference. They will pave the last mile back to trust and resilience.

Elhadj As Sy is Secretary General of the International Federation of Red Cross and Red Crescent Societies, responding to Ebola in 16 African nations; Yves Daccord is General Director of the International Committee of the Red Cross, which has long been present in the region, particular Liberia and Guinea, due to past conflicts. 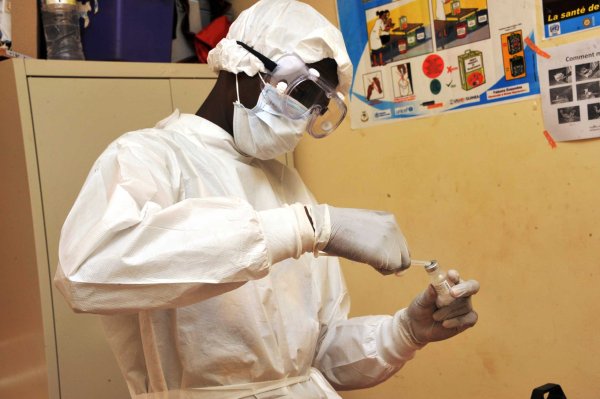 Ebola Vaccine Trial Starts in Guinea
Next Up: Editor's Pick