Many Doctors Don't Tell Patients They Have Alzheimer's

In a surprising new survey of patients who were asked about their interactions with their doctors, 45% of people whose doctors treated them for Alzheimer’s never told these patients that they had the degenerative brain disorder.

Led by researchers at the Alzheimer’s Association, the scientists looked at Medicare claim data from 2008 to 2010 for 16,000 people. They were asked, among other things, whether their doctors had ever told them they had Alzheimer’s disease. When the researchers then matched the respondents’ answers to their medical records, and the diagnostic codes that their doctors used to describe their care, only 45% of those who were billed for Alzheimer’s-related care were told by their doctors of their disease.

“What struck us was that physicians generally understand the positive benefits of disclosing the diagnosis, and agree with those benefits,” says Keith Fargo, director of scientific programs and outreach at the Association, who oversaw the analysis of the survey data. “But many still don’t do disclosure in their own practice.”

One of the few papers investigating the phenomenon of Alzheimer’s diagnoses found that as few as 36% of doctors said they usually told their patients if they had Alzheimer’s. The main reasons for the intentional omission? Fear of causing emotional distress in their patients and the lack of time and resources to fully explain what the diagnosis means. This was true of both primary care doctors as well as neurology specialists who have more expertise in brain-related disorders.

Dr. Robert Wergin, president of the American Academy of Family Physicians, advocates for transparency and honesty in disclosing diagnoses to his patients in his practice in Milford, Nebraska. But he understands why many physicians might be reluctant to use the word “Alzheimer’s” with their patients. “Labels are important,” he says. “When I label you and say you’ve got Alzheimer’s disease, then you’re likely to say, ‘Well that’s it for me, I better start looking for nursing homes.’”

MORE This Alzheimer’s Breakthrough Could Be a Game Changer

Alzheimer’s is a challenging diagnosis to make on several levels. First, it can only be definitively diagnosed at autopsy, when doctors can see the hallmark amyloid plaques and tangles that cause the gradual loss of memory and cognitive function. There is no blood test or brain scan that can conclusively tell doctors that a patient does or does not have the condition; while promising versions are being developed, it’s still a diagnosis that doctors make based on reports of the patients’ changing intellectual abilities and on psychiatric tests that aren’t specific for Alzheimer’s.

It’s also difficult to tell patients they likely have Alzheimer’s because there are currently no effective drugs for the disease. Medications can slow the effects of the cognitive decline, but nothing can stop or reverse the march of worsening symptoms. Wergin notes that once a patient is labeled with Alzheimer’s it could, at least before the Affordable Care Act, affect that patient’s ability to get insurance for nursing home care. “Once I label you, it’s in your chart. If an insurance company extracts your data, I’m not going to insure you because you are at higher risk of drawing on your coverage,” he says.

Wergin says that doctors may be over-anticipating the emotional distress that an Alzheimer’s diagnosis can bring. While the news is certainly difficult, most patients and their caregivers may already be aware that a neurodegenerative disease like Alzheimer’s may be present. And while there are no treatments that physicians can prescribe for their patients — at least not yet — Fargo and Beth Kallmyer, vice president of constituent services at the Association, note that it’s particularly important for Alzheimer’s patients and their families to know what to expect so they can begin planning. “There might not be a pill that slows the disease down or there might not be cures, but there are things people can do to impact their everyday quality of life,” says Kallmyer. “They can build a care team, and prepare advanced directives. And if a caregiver has knowledge of the disease, they can make things better in the day to day world of the person with the disease. If they don’t know about the diagnosis, they may not get that support.”

But making doctors more comfortable with the diagnosis will take more structural changes in the way we deliver health care. The Alzheimer’s Association is supporting legislation that would reimburse doctors and their staff for a longer discussion about Alzheimer’s and how to plan for the disease. More medical schools are also including discussion about such planning in their curricula, as doctors in coming decades will be increasingly called upon to make this difficult disclosure.

Read next: A Simple 3-Part Test May Predict Alzheimer’s 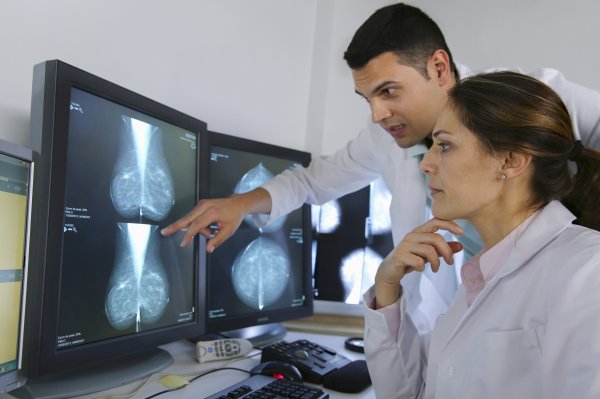 Your Doctor Likely Orders More Tests Than You Actually Need
Next Up: Editor's Pick