U.S. Sen. Ted Cruz (R-TX) stands on stage while speaking to a crowd gathered to announce his presidential candidacy at Liberty University in Lynchburg, Va. on March 23, 2015.
Andrew Harnik—AP
By Ryan Teague Beckwith

Sen. Ted Cruz launched his presidential campaign with a convocation — a speech that fused religious themes with political arguments and his family’s personal stories.

In a speech at Liberty University, the Texas Republican talked about the effects of “the transformative love of Jesus Christ” on his father and outlined a conservative platform that includes abolishing the IRS and repealing the Affordable Care Act.

“God has blessed America from the very beginning of this nation, and I believe God isn’t done with America yet,” he said.

The first candidate of either party to officially kick off a campaign, Cruz staked out a position on the conservative side of the Republican field, calling for a flat tax that would allow Americans to do their annual tax returns on a postcard, securing the border with Mexico and opposing gun control legislation.

In a veiled shot at GOP frontrunner Jeb Bush, Cruz also criticized Common Core, a set of academic standards put together by a bipartisan group of governors and promoted by the Obama Administration.

Cruz began the speech by talking about his parents’ immigrant stories: his father, who fled Cuba during political turmoil, and his mother, who became the first in her family to go to college. He then shared how his father became a Christian during a troubled time in his marriage.

“There are people who wonder if faith is real,” he said. “I can tell you in my family there is not a second of doubt, because were it not for the transformative love of Jesus Christ … Iwould have been raised by a single mom without my father in the household.”

He ended by calling for conservative Christians to stand up, repeating an argument made by evangelist Franklin Graham and others that a majority of Christians don’t vote.

“Today, roughly half of born-again Christians aren’t voting; they’re staying home,” he said. “Imagine instead millions of people of faith all across America coming out to the polls and voting our values.”

The speech was Cruz’s first public appearance since he tweeted Sunday night that he would be running. A 30-second video released Monday morning stressed his father’s immigration from Cuba and his opposition to the Affordable Care Act and President Obama’s executive actions deferring deportation for millions of undocumented immigrants.

Read More: A TIME profile of Ted Cruz from 2013

As TIME’s Alex Altman writes, the timing of Cruz’s announcement — in the final weeks of a federal fundraising period — shows that he’s willing to disrupt the typical routines of a presidential campaign.

A recent CNN poll showed Cruz toward the bottom of the crowded Republican field, with just four percent support. However, Bush, had only 13 percent in the same poll. 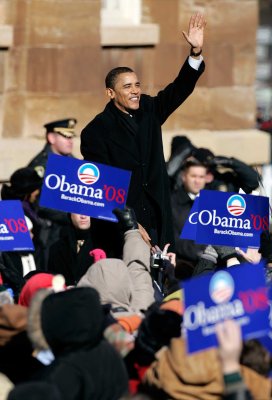