How Ted Cruz is Using Spanish in His Presidential Campaign

US Senator Ted Cruz( R-TX) smiles at the crowd while delivering remarks announcing his candidacy for the Republican nomination to run for US president March 23, 2015, inside the full Vine Center at Liberty University, in Lynchburg, Va.
Paul J. Richards—AFP/Getty Images
By Tessa Berenson

In 2012, then-Senate candidate Ted Cruz refused to debate his opponent in Spanish. Aside from being a “lousy” Spanish speaker, Cruz argued it was a bad idea: “Most Texans speak English … [My opponent] wants to do a debate in a language where the vast majority of primary voters don’t understand it, because he doesn’t want them to hear about his record.”

But when he launched his presidential campaign Monday, the Texas Republican posted a Spanish language ad on YouTube. In keeping with his previous argument, however, the ad does not feature any discussion of policy, instead focusing only on Cruz’s personal story.

“The story of Ted Cruz is like the story of many American families,” the ad begins (in Spanish). It then talks about how his father was a Cuban immigrant, and how Cruz was raised to believe in what America represents: “Faith, liberty and opportunity.”

The ad differs from one in English posted at the same time, which mentions his opposition to the Affordable Care Act, the debt ceiling increase and President Obama’s executive action on immigration.

Cruz does not speak Spanish, but the ad is a sign that he hopes to compete with the other 2016 contenders who have inroads to the Hispanic community: Jeb Bush, who is fluent in Spanish and married to a Mexican woman, and Marco Rubio, the bilingual son of Cuban-American immigrants.

Still, it won’t do much for Cruz in the crucial early primary states of Iowa, New Hampshire and South Carolina, which don’t have substantial Latino populations. The first time Spanish will likely come into play in the election will be in Florida, which has the third-largest Hispanic population in the country after California and Texas.

But the existence of the ad can be a selling point. After the 2012 election, the Republican Party put together a post-mortem report that argued that the party needs to do a better job of reaching out to minorities. The ad is one way to signal to the conservative base that Cruz thinks he can do just that in a general election campaign with Hispanics, who make up 17% of the nation.

Some experts say the fact that Cruz doesn’t speak Spanish himself isn’t a big problem. “It is obviously heartening to the community when someone speaks to them in Spanish, and it is an asset they can use on television and radio,” Henry Cisneros, former mayor of San Antonio, Texas, told the Wall Street Journal. “But increasingly it is not essential … It’s not unusual to find second- and third-generation Latinos who don’t speak Spanish because they grew up in a completely integrated society.”

“When my father came over here penniless with $100 sewn into his underwear, thank God some well-meaning liberal didn’t come put his arm around him and say, ‘Let me take care of you. Let me put you on the government dole [and] rob you of your self respect,” he said in 2012. “And by the way, don’t bother to learn English. Let me keep you in a language ghetto.”

Still, it will take more than Spanish ads to win over Latino voters. Two of the policy positions Cruz doesn’t mention in his YouTube ad — his opposition to immigration reform and his plans to repeal the Affordable Care Act — are unpopular in the Hispanic community. (Polling by the Pew Research Center shows two-thirds of Hispanic voters back immigration reform, while 47 percent approve of Obamacare, tied with its disapproval rate but six percentage points above the public overall.) 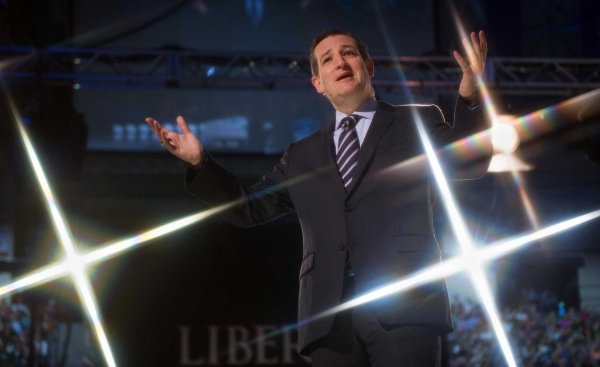