The Puerto Rican government announced on Friday that it would drop its opposition to same-sex marriage.

Justice Secretary Cesar Miranda said at a news conference that the Puerto Rican justice department would no longer oppose a suit challenging the constitutionality of the socially conservative island’s ban.

“Our constitutional system does not allow discriminatory distinctions such as that contained in the Civil Code concerning the rights of same-sex couples,” Gov. Alejandro Garcia Padilla said in a statement posted to his office’s website. “Everyone knows my religious beliefs, but it is not for political leaders to impose our beliefs. We must push for progress in civil and human rights for all citizens equally. As Governor of Puerto Rico, that’s my duty.”

Puerto Rico native Ricky Martin, who has advocated for gay rights since he announced he was gay in 2010, said on Twitter that he was grateful for the move.

In a lengthier statement, the singer called Padilla a “leader who is not afraid of the present challenges.”

“Today is a great day for my island,” he wrote. “How proud I am to live a country of equality. I love you Puerto Rico.” 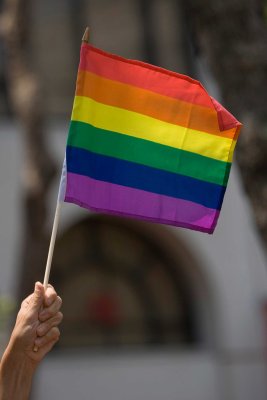 The 10 Cities With the Highest LGBT Percentage in the U.S.
Next Up: Editor's Pick