Ireland-based airline Ryanair has grounded plans to offer ultra-cheap flights over the Atlantic after having seemingly approved them earlier this week.

The company’s chief exec Michael O’Leary said the airline “f—ed up,” according to the Irish Independent, and that the initial news was “a miscommunication.”

In a statement — literally, one sentence — Ryanair’s board rejected ever having green lit such a plan.

“In the light of recent press coverage, the Board of Ryanair Holdings Plc wishes to clarify that it has not considered or approved any transatlantic project and does not intend to do so,” the statement read.

On Monday, the no-frills airline said that it intended to make good on the idea that it has been floating since 2008: starting at less than $15, passengers would be able to travel between European airports and a dozen or so United States cities. “European consumers want lower-cost travel to the U.S.A., and the same for Americans coming to Europe,” said the airline in a statement. “We see it as a logical development in the European market.”

Joe Brancatelli, an expert in business travel, was entirely unsurprised that the airline, one of Ireland’s biggest companies, had retracted its pronouncement. “Ryanair has a history of making bulls–t announcements,” he reportedly told Yahoo in an email, citing the CEO’s much-reported suggestion that Ryanair might make passengers pay to use toilets. (Leary also reportedly considered charging extra for overweight passengers.)

Indeed, Leary has a knack for garnering attention with his loquacity.

At the time of the announcement, The New York Times presciently observed: “The service is still at least four years in the future, and it might be that talk of such rock-bottom fares is nothing more than a promotional gimmick.”

Even with the plummeting cost of oil fattening the airline industry wallets, a $15 transatlantic flight would be a feat indeed. 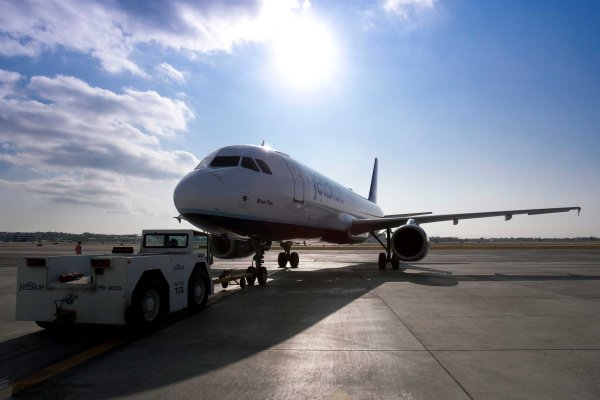 This Airline Has the Highest Approval Rating in America
Next Up: Editor's Pick