Families often do everything they can to help their children with schoolwork, but a few dozen relatives of Indian students taking high school exams in Bihar took things a little too far.

Images that went viral on social media across the country on Thursday showed parents and other “well-wishers” of students, in a seeming combination of brazenness and desperation, scaling the walls of the testing centers to pass cheat sheets through the windows.

Cheating during India’s highly competitive school exams is a common problem in Bihar, which is India’s least educated state with a literacy rate of 63% in 2011 (albeit a vast improvement from its 47% figure in 2001).

More than 1,000 students taking the Class 10 and Class 12 board exams — the first two major milestones in an Indian student’s pre-college academic career — have already been banned for malpractices in the past two days. But with over 1.4 million students appearing across 1,100 centers, authorities admit that it is practically impossible to completely clamp down.

“It is a big challenge to stop 100% unfair means in the examination,” P.K. Sahi, the state’s education minister, told local media.

Not that the students seemed to care. A photojournalist featured in the BBC said students were openly copying from textbooks, and weren’t in the least bit deterred by his presence or the fact that he was snapping away.

Police officers deputed to the schools to monitor the tests are allegedly bribed to turn a blind eye to malpractices.

“If we try to stop unfair means at a center, friends and family members of the examinees gang up to intimidate us,” Saroj Sinha, a local schoolteacher, told Indian newspaper the Hindu.

Sahi added that the onus of preventing cheating should not be placed on the government alone. “I also want to ask people if it is not the responsibility of the society as well to stop it?” he asked. 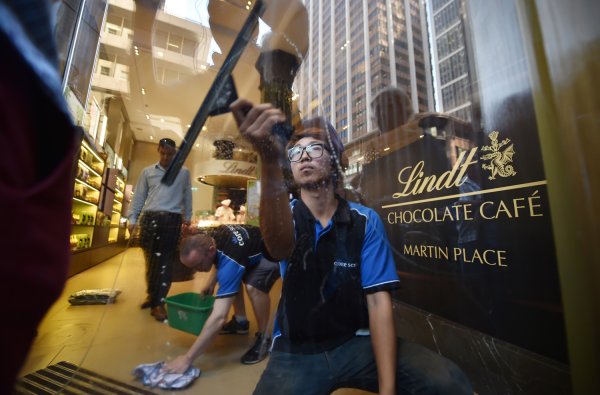 Sydney Siege Café Reopens for Business
Next Up: Editor's Pick