An attendee inspects the new Apple Watch during an Apple special event at the Flint Center for the Performing Arts on September 9, 2014 in Cupertino, California.
Justin Sullivan—Getty Images
By Alex Fitzpatrick

Apple is reportedly planning a first-of-its-kind trade-in deal offering gift cards to Android users swapping for a new iPhone. The deal will “begin in the coming weeks,” according to 9to5mac.

You know what else begins in the coming weeks? Sales of the Apple Watch, which goes into preview mode April 10 with actual shopping starting April 24.

That’s not a coincidence. If you want an Apple Watch, you need the iPhone 5 or newer to go along with it. That makes it just one more way Apple can suck customers into its gadget and software ecosystem. Apple is betting that the Apple Watch will be so much more compelling than the Android-compatible smartwatches on the market, like Motorola’s Moto 360, that Android users will abandon ship and finally See The Light.

That explains the timing of the unprecedented gift card deal better than it just being a move to boost sales — Apple really doesn’t need help in that department anyway, recently posting record iPhone sales. It’s also a safe bet Apple will see some pretty stellar foot traffic in Apple Stores once the Watch preview period begins.

Read next: Tim Cook: The Apple Watch Is the First Smartwatch ‘That Matters’ 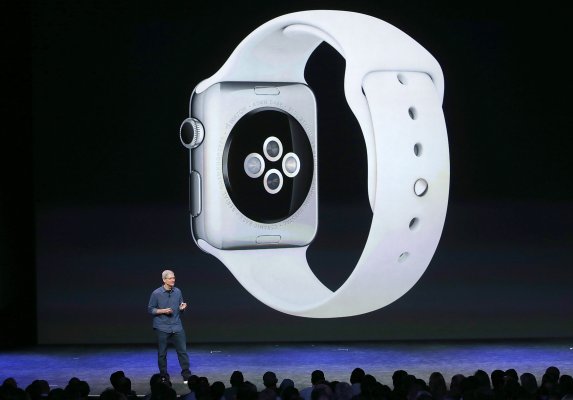 Tim Cook: The Apple Watch Is the First Smartwatch 'That Matters'
Next Up: Editor's Pick