Bryan and Lanette Davies pose for a portrait at their "Christian-based" medical marijuana dispensary in Sacramento in February 2014.
Katy Steinmetz / TIME
By Katy Steinmetz

When Bryan and Lanette Davies got an $875,000 bill from the Internal Revenue Service, they didn’t pay it. Instead, they took the IRS to court, arguing that a 1982 law meant to prevent drug traffickers from deducting business expenses should not apply to Canna Care, their small “Christian-based” medical marijuana dispensary in Sacramento—or any other medical marijuana dispensary legal under state law.

The couple is in the midst of a years-long legal battle over these expenses, arguing that marijuana dispensaries should be treated like most other small businesses and be allowed to deduct payroll, rent and health benefits from their taxable income.

But a new bill introduced in the Senate could help bring their trial to a conclusion.

On March 10, three Senators introduced a historic bill called the CARERS Act that would end the federal ban on medical marijuana, clearing up the discrepancy between federal law that considers pot an illegal drug and the 23 state laws that sanction the use of medical weed. The bill explicitly does several things: It would reschedule marijuana as a drug with known medical uses to allow for research. It would allow banks to work with dispensaries—both medical and recreational—without fear of being prosecuted for money laundering. And it would create an exception in the Controlled Substances Act that essentially says it doesn’t apply to medical marijuana in states where that substance has been legalized. That last part may help solve legal pot’s tax problem.

An obscure bit of the tax code known as 280E states that businesses in violation of the Controlled Substances Act can’t take a tax deduction or receive any credits for any expenses connected with their trafficking of illegal drugs, which is what medical marijuana dispensaries are currently doing in the eyes of the federal government. (Due to a tax court ruling, the one deduction they can take is for the cost of goods sold). The costs can be crippling, and politicians have joined dispensary owners in saying that prohibiting cocaine dealers from writing off the boats they bought to ship the drug, as one lawyer put it, is not the same as businesses deducting quotidian operating costs while on the right side of the law in their state.

In 2010, a group of Congress members, including Colorado Rep. Jared Polis and former Massachusetts Rep. Barney Frank, sent letters to the IRS asking the agency to interpret the tax code in a way that would allow medical marijuana businesses to be taxed on net income instead of gross income. This is what the IRS told those members of Congress in response:

Legal experts have said that the IRS’ hands are essentially tied. If this bill passes, University of Denver’s Sam Kamin says that may be enough for the IRS to loosen the rope and issue that guidance. “It definitely puts marijuana on much sounder footing and makes much clearer what the legal rights of marijuana businesses are,” he says.

Dan Riffle, director of federal policies for the Marijuana Policy Project, who worked with the Senators’ offices on the Hill to craft the bill, is more absolute in his interpretation: “It resolves the 280E issue.”

Both of them agree that the bill has the potential to affect other areas of life too, in states where medical marijuana is legal. It may prevent people from being fired for using marijuana as medicine. Parents may no longer lose custody of their kids for having medical marijuana in the house. Known medical-marijuana users could be allowed to legally own a firearm; if a drug user or addict currently possesses a firearm, that’s punishable by up to 10 years of jail time.

Malik Burnett, policy manager at the Drug Policy Alliance—which also had a hand in crafting the bill—cautions that these are only potential interpretations of a potential law and that separate, explicit legislation should be passed if reform advocates want to definitively solve these issues. But he says the bill would enable lawyers to make stronger arguments to protect clients who use medical marijuana. “You would certainly have more solid ground to stand on,” he says.

Since being introduced, the bill has gained two cosponsors: Republican Sen. Dean Heller of Nevada and, as of Monday, Democratic Sen. Barbara Boxer of California. Despite bipartisan support for the bill, it remains unclear whether it will be taken up in the Republican-controlled Senate.

The Davieses, in an interview for a previous article on their legal battle, said that they not only see themselves as a legitimate business but as a force of positive change in society. Lanette Davis said she felt they were being unfairly punished. “It has to do with taking care of the sick and ill. Jesus Christ made a statement that all people should care for one another, and this is our way of taking that to our community,” Lanette said. “What we try very hard to provide is a way for people to get well.” 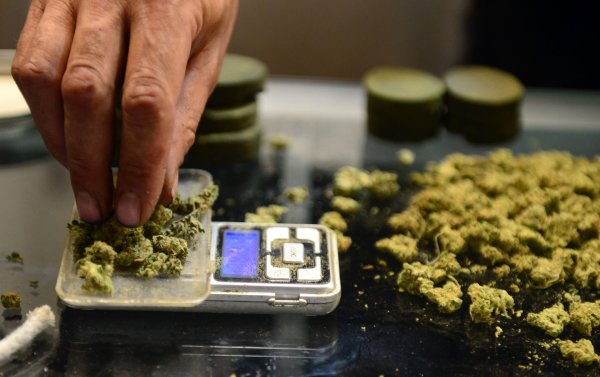 More States Could Legalize Pot
Next Up: Editor's Pick