Trump Explores a Run for President, But Still Has a Plan B

Donald Trump already has a plan for his first 100 days as president. But he also has a fallback if his bid for the White House doesn’t work out.

In an interview with TIME on Wednesday as he announced an exploratory committee for 2016, Trump said he is serious about a campaign and laid out a platform that included repealing Obamacare and toughening the United States’ stance in negotiations with Iran and China.

“The country is in serious trouble. I’ve never seen anything like it,” Trump said. “With me running things, all these countries throughout the world will not be ripping off the United States anymore.”

But the outspoken businessman isn’t letting go of his NBC hit show Celebrity Apprentice, despite earlier remarks by his advisers, who indicated he was not renewing the show.

“The network [has] picked up the show,” Sharon Panozzo, a publicity director for NBC told TIME. “Trump himself announced this during our live finale last month.”

The two options aren’t mutually exclusive. Trump has not set a production date for the reality show The Celebrity Apprentice, and can choose when to film the show. That means he could still return for a 15th season of the show after running for president.

The flamboyant billionaire has publicly flirted with a presidential bid in four election cycles since 1999 but has never actually run for the White House. In 2011, he delayed the renewal of The Celebrity Apprentice and said he was “seriously” considering running. He described his approach in similar terms in 2004 and 1999.

On Wednesday, Trump said again he is “looking at it very, very seriously,” and is waiting to see when the other possible candidates announce. He said he has staff in Iowa, New Hampshire and South Carolina and has planned speeches in both New Hampshire and Iowa in upcoming weeks.

“I have a great group of people surrounding and working with me,” Trump told TIME. “The country’s going to hell, and when I give the message, people will agree with me.”

In separate interviews, Trump and his special counsel, Michael Cohen, did not elaborate on his staff appointments.

The reality show host would face significant challenges if he chooses to run for president. Nearly three-quarters of GOP primary voters said they couldn’t see themselves supporting Donald Trump in a presidential run, according to a Wall Street Journal/NBC News poll, uniting more Republicans against his candidacy than any other potential candidate.

When asked about his poll numbers, Trump said, “It doesn’t mean anything. They don’t think I’m running, which totally affects that… A lot of people say, ‘I’d vote for Trump, but he’s not going to run so therefore I’m not going to put him in a poll.'”

Like other Republican candidates, he also criticized the Obama administration’s handling of the negotiations with Iran. “It’s incredible that the sanctions, they took them off [Iran]. Who negotiates that way?” he said. “I would have tripled the sanctions and then negotiated, and you would have made a deal.”

“I wrote the book the Art of the Deal, which is the number one business seller of all time,” Trump said, plugging his 1987 bestseller. “This is not the ‘art of the deal’ that they’re doing. This is the art of people that are not very smart,” he continued. “They don’t have a clue.”

Read next: Democrats On Trump: ‘Everything Is Awesome’ 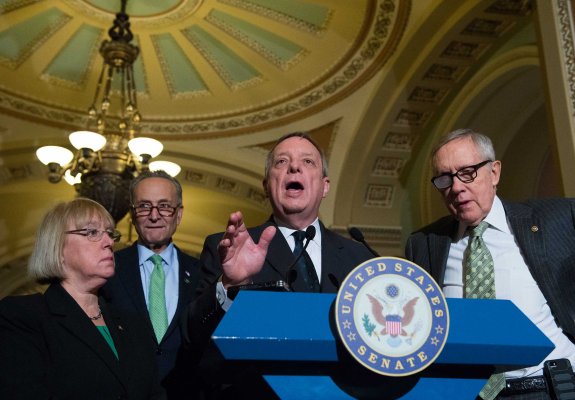