President Obama is rooting for the Kentucky Wildcats.

The President met with ESPN’s Andy Katz on Tuesday to name his picks for the 2015 Men’s NCAA Basketball Tournament, and he predicted Kentucky would complete its unbeaten season to triumph over Villanova in the final championship game. The Commander-in-Chief has completed the “Presidential bracket” since he took office in 2009.

Obama’s picks show very little love for the nation’s underdog teams, but he has some surprising upsets with No. 10 Davidson besting No. 2 Gonzaga to compete against No. 3 Iowa State in the Sweet Sixteen.

Obama’s Elite Eight features match-ups between Duke and Iowa State, Villanova and Virginia, Kentucky and Notre Dame, and Wisconsin and Arizona, with Kentucky, Arizona, Duke and Villanova proceeding to the Final Four.

ESPN notes the President’s odds are already off: on his bracket BYU beats Ole Miss., but BYU was knocked out in an opening round game on Tuesday.

As TIME’s Jack Dickey points out, the President has only picked the right men’s champion once: in 2009 when he tapped the North Carolina Tarheels to win.

The President’s picks for the women’s tournament are set to be released on Thursday. 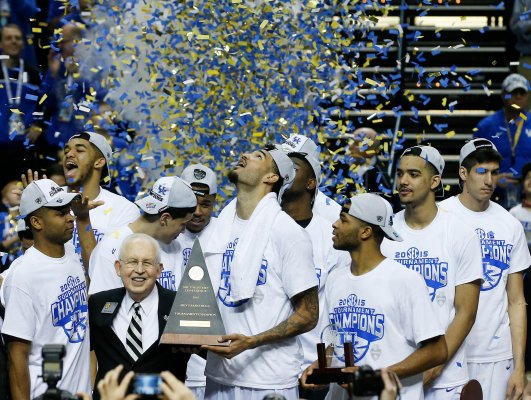