A Pakistani lawyer who represented the doctor charged with helping U.S. intelligence authorities hunt down al-Qaeda leader Osama bin Laden was killed on Tuesday, according to local police in his hometown of Peshawar.

A police official said Samiullah Afridi was shot in the abdomen and neck while returning to his home and died on the spot, Reuters reports.

Afridi had reportedly received death threats for defending Dr. Shakil Afridi (no relation), who was handed a controversial 33-year jail sentence in 2012 for running a fake vaccination campaign that helped CIA agents locate the Saudi-born terrorist leader. Two militant groups, both affiliated with the Pakistani Taliban, have claimed responsibility for Afridi’s murder.

“We killed him because he was defending Shakil, who is our enemy,” said Taliban splinter group Jundullah. Another Taliban faction, the Tehreek-e-Taliban Pakistan Jamaatul Ahrar, said it killed Afridi because they couldn’t get to the doctor who “spied on our respected and supreme leader Sheik Osama.”

The lawyer had only recently returned to Pakistan, having relocated to Dubai after quitting the case last year out of concern for his safety. “Not only is my life in danger, my family is also in danger,” he had said in an interview with Reuters.

The targeting of lawyers by militant groups is not uncommon in Pakistan, says Hasan Askari Rizvi, a Lahore-based Pakistani political scientist and commentator, citing the murder last year of prominent prosecution lawyer Chaudhry Zulfiqar Ali. Ali was involved in the trial of Zaki-ur-Rehman Lakhvi, accused of masterminding the Mumbai terror attacks of 2008, as well as the case of former Pakistani Prime Minister Benazir Bhutto’s 2007 assassination — he was gunned down in his car last May while on his way to court.

Dr. Afridi, meanwhile, had his sentence overturned in 2013 and is currently awaiting a new trial.

“It becomes difficult to find a lawyer because nobody wants to stick their neck out, and therefore cases stay pending and nothing happens,” Rizvi tells TIME. “The government will be able to find a lawyer, maybe in a couple of months’ time, but the new lawyer will also become a target of these groups and that fear will haunt the whole process.”

Pakistani militant groups have also cracked down on polio-vaccination drives following bin Laden’s killing and Dr. Afridi’s prosecution, saying they are un-Islamic and either fronts for espionage or an attempt to sterilize Muslims.

On Tuesday, a gun attack killed two female immunization workers at an Afghan refugee camp near Pakistan’s northwestern city of Mansehra, according to Agence France-Presse. The incident is the latest in a recent spate of attacks against polio workers, 77 of whom have been killed since December 2012.

Pakistan is one of only three countries in the world where the disease still exists, and the number of polio cases recorded in the country last year reached a 14-year high of 306. 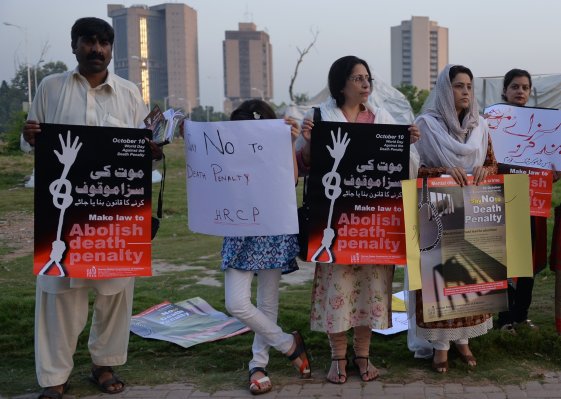 Pakistan Hangs 12 Men in Largest Execution in 7 Years
Next Up: Editor's Pick