Russian President Vladimir Putin put the nation’s northern fleet on full alert in the Arctic Ocean this week, as animosity between the Kremlin and NATO continues to simmer.

The order, which was handed down early Monday, allows for the mobilization of 38,000 military personnel, 3,360 pieces of equipment, 41 ships, 15 submarines and 110 airplanes, according to Russian Defense Minister Sergei Shoigu.

“New challenges and threats of military security demand the further heightening of military capabilities of the armed forces and special attention will be paid to the state of the newly formed strategic merging [of forces] in the North,” said Shoigu, according to state media outlet Sputnik.

The mobilization of the Russian fleet appears to have been triggered by ongoing NATO-led military drills across northern and eastern European, including maritime exercises in the Black Sea.

On Monday, Russian Deputy Foreign Minister Alexey Meshkov accused NATO of conducting operations that were effectively undermining one of the world’s most stable regions.

“Such NATO actions lead to destabilization of the situation and increasing tensions in northeastern Europe,” Meshkov added, according to the Russia’s TASS news agency.

However, NATO has argued that Russia has continually stoked hostilities throughout the region by annexing the Crimea Peninsula in Ukraine and repeatedly violating European airspace.

NATO spokesperson Oana Lungescu tells TIME that Russian snap exercises were a “serious concern” and completely out of proportion with the bloc’s drills.

By comparison, NATO only had 1,200 sailors onboard six ships in the Black Sea, she says, while ally Norway is conduting parallel national drills involving 5,000 troops.

“Russia has conducted about a dozen snap exercises over the past two years,” adds Lungescu. “Russia’s takeover of Crimea was done under the guise of a snap exercise. Russia’s snap exercises run counter to the spirit of the Vienna Document on confidence and security-building measures.”

Earlier this week, Putin admitted during a documentary broadcasted on Sunday that he considered putting the nation’s nuclear capabilities on alert to prevent outside agents from interfering with the Kremlin’s forced annexation of the Crimea peninsula last March. 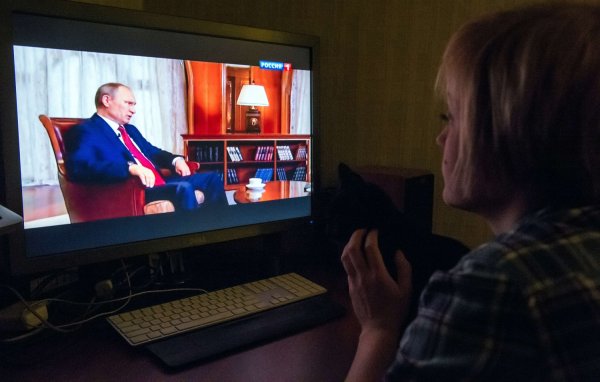 Putin Admits to Weighing Nuclear Option in Crimea
Next Up: Editor's Pick