Phil Blackwood, a bar manager from New Zealand, comes out of court after being sentenced to two and half years in prison, at Bahan township court in Yangon on March 17, 2015.
Soe Zeya Tun—Reuters
By David Stout

A Burmese court sentenced a New Zealand citizen and two Burmese nationals to 2½ years in prison with hard labor for posting a promotional advert on social media that depicted the Buddha wearing headphones.

State prosecutors claimed the image posted last year on the Facebook page of V Gastro bar, where Phil Blackwood worked as the general manager, was an insult to the Buddhist religion.

The establishment later issued an apology for causing offense, but Blackwood, along with the bar’s Burmese owner Tun Thurein and manager Htut Ko Ko Lwin, were arrested on Dec. 10 and have been held in Rangoon’s notorious Insein Prison ever since.

“Well, hopefully a bit of justice is going to happen,” Blackwood told the BBC as he was frog-marched into court by police.

“That these three men acted in a culturally insensitive way by posting the Buddha with headphones image on Facebook is obvious, but that is nothing they should have been hauled into court for, much less sent to prison,” said Phil Robertson, deputy Asia director of Human Rights Watch.

Burma has been rocked by myriad bouts of ethnosectarian violence pitting Buddhist extremist against the nation’s tiny Muslim minority since the country’s ruling military junta unveiled political reforms in late 2011.

The nationalist movement, known locally as 969, has helped bolster a growing wave of Buddhist chauvinism throughout the country. Nevertheless, over 90% of respondents to a poll conducted by local media outlet DVB said the V Gastro trio did not deserve to be jailed.

Analysts say Tuesday’s court decision may also be used to shore up political capital for potential candidates ahead of Burma’s national elections later this year.

“This is an election year and religion is already being used for political purposes,” Matthew Smith, executive director of the Fortify Rights advocacy group, tells TIME. “It’s become a race to the bottom to determine who is a stronger defender of conservative Buddhism, and that’s dangerous territory to be entering.” 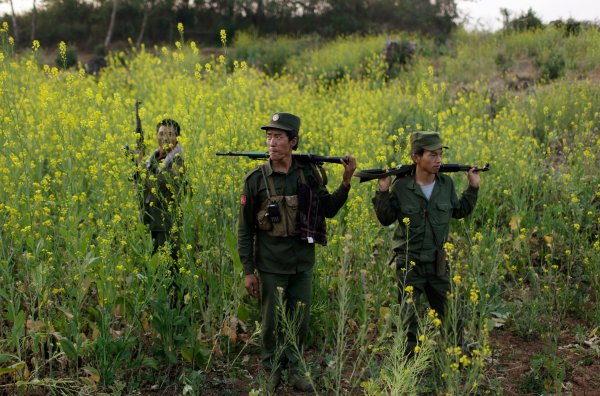 China Accuses Burmese Military of Fatal Bombing Across Border
Next Up: Editor's Pick