Elisha Cuthbert Loves the Lesbian Jokes in One Big Happy

There haven’t been many sitcoms centered on a lesbian character since Ellen and The Ellen Show, but Ellen DeGeneres is hoping to change that with One Big Happy. The talk-show host is the executive producer this time around, not the star — that job goes to Elisha Cuthbert. She plays Lizzie, a sweet but uptight woman who decides to have a baby (platonically, not the old-fashioned way) with her straight best friend Luke (Nick Zano). Things get complicated when he meets and quickly marries a beautiful British woman, Prudence (Kelly Brook) who’s in danger of being deported.

The pilot airs Tuesday, and the show will be under a fair amount of pressure to get renewed — NBC only ordered 6 episodes for a midseason release. In advance of the premiere, we caught up with Cuthbert to talk about the show’s sense of humor and the influence of Ellen and the show’s creator, Liz Feldman.

TIME: What drew you to this show and this character?

Cuthbert: I got the script and I remember vividly laughing out loud at some jokes, which is always for me a really great sign that the comedy doesn’t have to be willed to be funny — it just is. So that was really promising. And then I was just so over-the-moon excited that Ellen DeGeneres and Liz Feldman would consider me to play Lizzy. I mean, they are two very influential lesbians and I was just kind of shocked and ecstatic that they thought I was right for it, and that they thought I was funny and that I could do this part properly and give it some sort of justice. It was fantastic.

I do have to tell you I was terrified of doing a sitcom, ironically, not of anything else. It’s out of my wheelhouse, I’d never done one before. As you get older you get a little bit more fearful, I guess! I was sort of going, “Hmm, I don’t know if I can do that, I don’t know if I can handle that.” And Nick Zano, who plays Luke, was the one who called me up and said, “Don’t let the process stop you from playing the character, because I know you can do it and I’ll be there for you and we’ll do it together.” He really was a huge support for me.

As executive producer, has Ellen been involved in the process?

She really has been involved. I was ready to be like, “We’re never gonna see her,” because she just has so much going on. But she actually did come a lot, and came and warmed up the audience before tape nights, which was also kind of intimidating because she’s so funny, and then it’s like, “Okay, now she’s gone,” and then we have to entertain them! It was kind of crazy. It’s really kind of hard to follow comedy after Ellen DeGeneres. She was there for the pilot, gave us some great notes about what she wanted from us as far as making sure Nick and my character’s friendship was believable, because without that the show is nothing.

Watch Michelle Obama Get Down to 'Uptown Funk' With Ellen DeGeneres

The punchline of a lot of jokes is basically just that Lizzy’s a lesbian. Are you nervous about whether actual lesbians will find that funny?

I never had too much concern because when you have Liz Feldman at the helm and Ellen Degeneres, I thought that their taste would be appropriate and that they would have a much better gauge about whether we were going down the right path with certain jokes or not. I was laughing out loud, too, [at] really great jokes, like when Luke says to me, “I knew you were gay when you wore a top hat to prom.” I mean it’s just funny stuff. It’s crazy and goofy and it’s real friends poking fun at one another.

What’s the latest you’ve heard on whether NBC will order more episodes?

Generally you find that out in May. It would be season 2, but we did discuss when the baby’s coming. We didn’t feel like we got enough great stuff out of it. There’s still more awkwardness in being pregnant, and you really didn’t get to see the baby bump at all. So it would be season 2 and then it would be the pregnancy, no delivery at that point.

Sometimes you’ll get a midseason release like [this]. It actually was perfect in the sense that if we had started at the start of this year, there’s a lot of pressure going into a new show to do well and to get great numbers. When there’s a midseason show the heat is tapered down a little bit. We’re just gonna get a chance to go on and to see if people respond.

Do you have special plans for watching the pilot?

I know that we’re definitely live tweeting for the East Coast and the West Coast. It’s St. Patrick’s Day, so it’s a little hard to go to any sort of bar. I think we’re planning to get together at someone’s house, possibly.

Big pivot: Would you ever do a Girl Next Door sequel?

I feel like Danielle would be a little old at this point. It would definitely be a different story. But I had such a great time doing that movie, and I know that it’s special to a lot of people, which makes it even better. But yeah, I would definitely collaborate with [director] Luke Greenfield again. I would definitely work with all of those guys again, for sure. I mean Timothy Olyphant is just brilliant. He’s so good in that movie and he’s so good on [Justified]. He’s just a tremendous actor, I’m really lucky that I got to work with him.

Most Popular on TIME
1
Officials Possibly Exposed to COVID by Trump Jr. Girlfriend
2
Masks Are Effective Way to Limit COVID-19
3
Why It Matters That People Are Watching 'The Help' 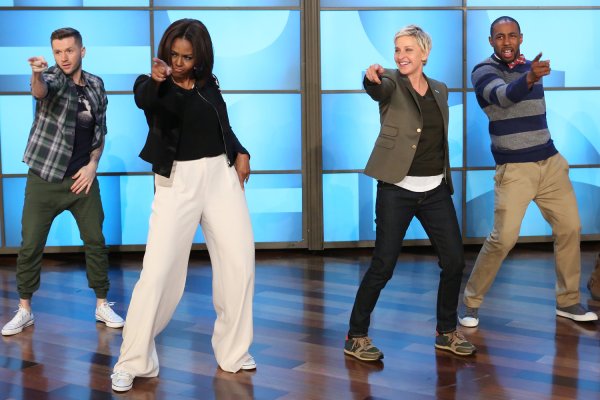